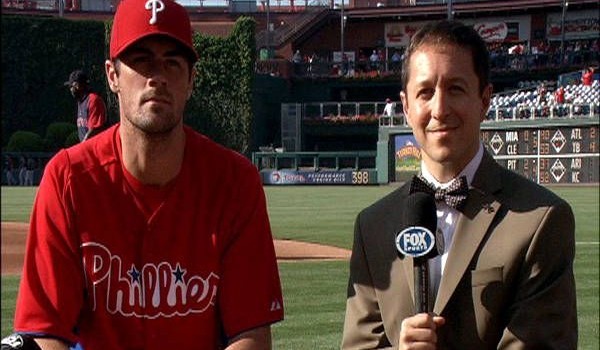 ROSENTHAL BASHED MLB COMMISH, THEN WAS FIRED BY MLB NETWORK — SOUNDS RIGHT TO US!

You’re going to read a lot about Ken Rosenthal losing his job because he criticized MLB commish Rob Manfred.

He did lose his job because he dared criticize Manfred, the worst commissioner MLB has had in forever.

But it’s not a First Amendment issue.

Because he was fired from the MLB Network, which is owned by Major League Baseball.

I mean, why is anyone surprised that if you bash your boss your contract likely won’t be renewed?

It is believed that Rosenthal’s past criticism of Manfred in columns written for The Athletic played a part in the decision, according to Andrew Marchand of the New York Post.

Rosenthal was reportedly kept off the air for three months in 2020 after he wrote columns analyzing Manfred’s handling of negotiations over a season threatened, and ultimately shrunk, by the COVID-19 pandemic. No formal suspension was ever announced and Rosenthal was still paid, ultimately returning for MLB Network’s trade deadline coverage at the end of August.

Rosenthal was once again a regular on the network after that, but his contract ultimately expired at the end of 2021. From the Post:

“As MLB Network continues to look at fresh ways to bring baseball to our viewers, there is a natural turnover in our talent roster that takes place each year,” an MLB spokesman told The Post. “Ken played a significant part at MLB Network over the last 13 years. From spring training to the winter meetings, we thank him for his work across MLB Network’s studio, game and event programming, and wish him the very best going forward.”

Rosenthal confirmed he was done at MLB Network in subsequent tweets, with a pointed note about maintaining his journalistic integrity, and confirmed he will continue to work at The Athletic and Fox Sports.