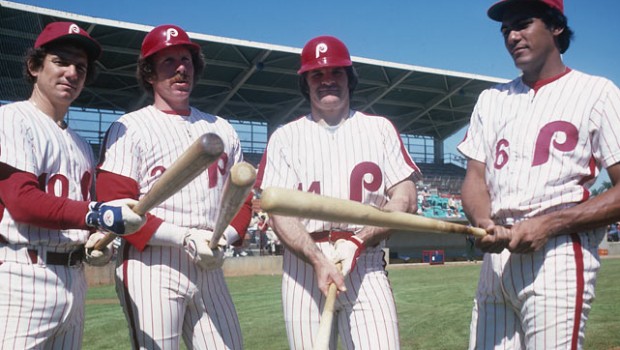 ROSE TO PHILLIES’ WALL IS A PRECURSOR TO THE HALL!

Pete Rose (second from right) may soon be joining Mike Schmidt in the baseball Hall of Fame!

The Phillies will add MLB hit leader Pete Rose to their Wall of Fame in August, permission for which needed to be gained by MLB.

Is this MLB Commish Rob Manfred’s way of easing Rose in the baseball Hall of Fame in Cooperstown?

Rose, who was banned for life by MLB in 1989 for gambling, was added to the Reds Hall of Fame last year. He spent nearly 19 of his 24 major-league seasons with Cincinnati and five with the Phillies, plus a half season with the Expos in 1984.

The Phillies signed Rose to a record-setting four-year, $3.2 million contract in 1979. He recorded 826 of his 4,256 hits in a Philly uniform and won the last of his three World Series rings with the team in 1980.

This winter, the Phillies sought MLB’s permission to add Rose to the Wall of Fame. The Wall is located on a concourse in the outfield known as Ashburn Alley and is part of a larger exhibit on the team’s baseball history.