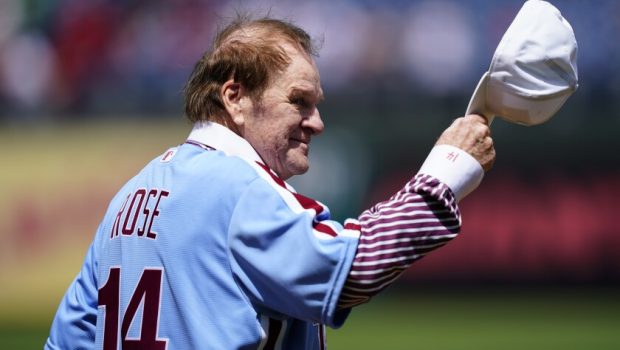 ROSE MESSAGE TO WOMEN: I’M AS BIG AN ASSHOLE AS YOU THOUGHT!

And it may be 33 years since MLB banned him because he gambled, including on the team he was managing, the Reds,.

But none of that mattered yesterday when the Phillies welcomed the major league hit king back into their warm embrace.

Rose dismissed and made a joke about his first appearance on the field in Philly since the franchise scrapped plans in 2017 to honor him because of a woman’s allegation that baseball’s hit king had sex with her when she was a minor.

“It was 55 years ago, babe,” Rose told a female baseball writer for the Inky.

Rose, 81, declined to answer any other questions in the dugout moments after a team photo in the outfield meant to celebrate the Phillies‘ 1980 World Series championship team and other former players. The original 1980 anniversary celebration was postponed for two seasons because of the coronavirus pandemic.

The reporter tweeted later Sunday that, after the ceremony, Rose asked her if he had offended her and offered to “sign 1,000 baseballs” for forgiveness before ultimately saying he was “sorry.”

Rose also blew off another question from The Associated Press after the ceremony about the allegation and his comment earlier in the day.

“Who cares what happened 50 years ago?” Rose said, according to the Inquirer. “You weren’t even born. So you shouldn’t be talking about it, because you weren’t born. If you don’t know a damn thing about it, don’t talk about it.”

Rose made his first appearance on the playing field in Philadelphia since receiving a lifetime ban from Major League Baseball in August 1989. He agreed to the ban after an investigation for MLB by lawyer John Dowd found that Rose placed numerous bets on the Cincinnati Reds to win from 1985 to 1987 while he was playing for and managing the team.

After initially getting booed lightly, Rose received a standing ovation from Phillies fans — many not alive or too young to remember baseball’s hit king in his prime — when he walked onto the Citizens Bank Park field on Sunday.

“They made me feel real good today,” Rose said of the cheers. “I don’t want to say I expected it. I guess I did expect it from Philly fans. That’s the way they are. They love their sports heroes.”

Rose was among many former great Phillies — including Hall of Famer Steve Carlton and fellow World Series champions Bob Boone, Greg Luzinski and Larry Bowa — honored for the 1980 team. Mike Schmidt sent a videotaped message and missed the alumni day festivities because he had tested positive for COVID-19.

“We’ve been doing it for a while, coming back every year, and to mix Pete in, I thought, was very special,” Boone said. “When I go to [Cooperstown], I always thought he should be there. You can write anything there, but he was the greatest hitter in the league. Put his name up and put he did this, got punished for whatever.”

The woman, identified as Jane Doe in 2017, said Rose called her in 1973, when she was 14 or 15, and they had sexual encounters in Cincinnati that lasted several years. She also alleged Rose met her in locations outside Ohio for sex.

Rose’s lawyer had said the woman’s claims are unverified.

Rose acknowledged in 2017 that he did have a relationship with the woman, but he said it started when she was 16. He also said they never had sex outside Ohio.

At the time, Rose was in his mid-30s and was married with two children.

The Phillies were going to induct Rose into their Wall of Fame in an on-field ceremony. That ceremony was canceled, and there were no other plans to celebrate Rose until this season. He was introduced on the field before Sunday’s game alongside many former teammates from the 1980 title team.

Last month, the Phillies defended the decision to invite Rose to participate in the ceremony.

“In planning the 1980 reunion, we consulted with Pete’s teammates about his inclusion,” the Phillies said in a statement. “Everyone wants Pete to be part of the festivities since there would be no trophy in 1980 without him. In addition, the club received permission from the Commissioner’s Office to invite Pete as a member of the championship team.”

Rose has asked MLB to end his lifetime ban.