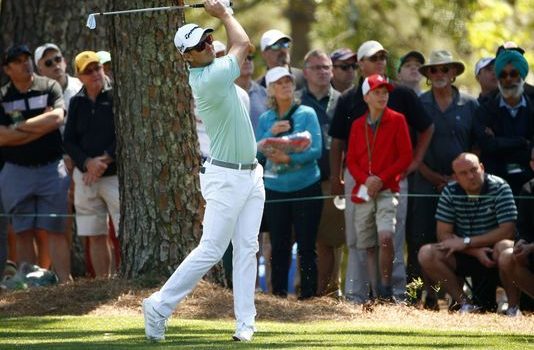 ROSE AND GARCIA LEAD MASTERS HEADED TO FINAL ROUND!

Justin Rose rocketed up and Charley Hoffman tumbled as the back nine shook up the Masters yesterday.

When the tremors were over, six players were within four shots of co-leaders Rose and Sergio Garcia.

“For the last couple of days, we were just waiting for that day,” Rose said. “The course was in magnificent shape, and it was there for the taking in the sense that, if you played great golf, you were rewarded. But it still had enough teeth that if you weren’t on your game it was going to get you.”

The rain earlier in the week and howling winds and cool temperatures Thursday and Friday made a mess of the scoreboard. There were low scores to be had, there just weren’t many people who could go out and get them.

But with a bright, sunny day and calm conditions yesterday there were moves to be made. And they came fast and furious after the turn.

A bogey on No. 6 left Rose at even par for the tournament, scuffling in the middle of the pack. But a birdie on the par-3 No. 12 — a hole he’d bogeyed the first two rounds — started a run of five over the last seven holes.

When he knocked in an 11-footer on 18 for the last, he was atop the leaderboard at Augusta National for the first time.

“I knew I needed to get going for sure. But I had confidence that I would have my run,” Rose said. “… And then today I began to feel very comfortable on the greens. Just things began to click and I had my run.”

Garcia made a 7-footer on 18 to save par, as big as either of the birdies he had on the back nine.

Jordan Spieth, his chances for a second green jacket in three years all but written off after his quadruple bogey in the first round, came roaring back Saturday and is just two strokes behind the leaders.

But it wasn’t just guys climbing the standings. The moves backward on the back nine Saturday were equally significant.

Of the eight players who went off last yesterday, only three — Garcia, Rickie Fowler and Ryan Moore — finished below par.

Remember Hoffman, who had been atop the leaderboard since Thursday afternoon? Well, no longer. He started flirting with danger with a bogey on the par-4 14th. He managed to save par after an errant drive on 15, only to dunk his tee shot in the water on the par-3 16th.

Hoffman is now two strokes off the lead.

Young guns Thomas Pieters and Jon Rahm, thought to have the best chance to end the rookie drought, are going to need a lot of help just to get in the conversation Sunday. Pieters bogeyed two of his last five holes, including the 18th, while Rahm made bogeys on 16 and 17.

Fred Couples was continuing to turn back the clock until a double bogey on 15, followed by a bogey on 16.

“Everybody knows, this back nine, anything can happen,” Hoffman said.