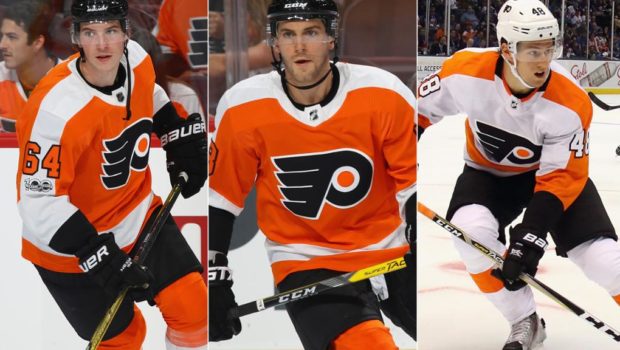 Rookie forwards Nolan Patrick and Taylor Leier and rookie defenseman Robert Hagg will be a part of the opening night roster for the 2017-18 Flyers squad.

Rookie forward Oskar Lindblom has been assigned to the club’s AHL affiliate, the Lehigh Valley Phantoms.

Defenseman Shayne Gostisbehere left late in the third period of last night’s Isles exo due to an upper-body injury.

Leier appeared in four preseason games for the Flyers, where he recorded two goals and an assist for three points and an even rating. Leier also saw significant time on the team’s penalty killing unit throughout the preseason.

Hagg played in six out of seven possible preseason games, going scoreless, but logged heavy minutes and a plus-1 rating to go along with 12 shots on goal.

“[I’m] Pretty happy, was kinda nervous when I walked in there, but after the meeting I was extremely happy to make the team,” said Hagg, who also commented on the challenges that are ahead after making the team. “I need to step up my game even more I think to be able to play at this level and I’m gonna do my best out there.”

As for Lindblom, he will report to Phantoms training camp, where the club is set to open the 2017-18 regular season on Saturday, October 7. He appeared in four preseason games and recorded a goal and an assist to go along with an even rating and nine shots on goal. Lindblom also participated in the Flyers-Islanders Rookie Game held on Sept. 13 at the Wells Fargo Center.

With the roster at 24 players, defensemen Travis Sanheim and Samuel Morin still remain in camp. The final opening night roster is officially due to the National Hockey League office on Tuesday, Oct. 3 at 5 p.m. ET