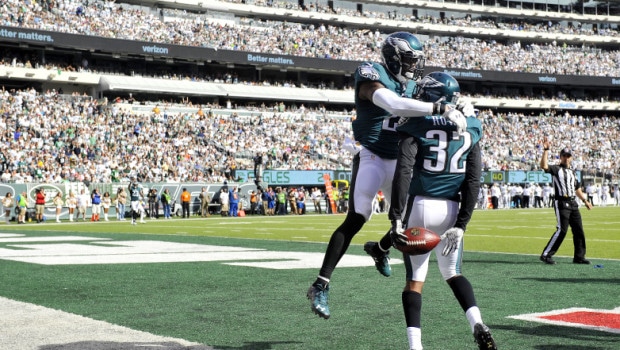 “He should have had two [interceptions],” cornerback Nolan Carroll (celebrating with the rookie above) said of Rowe.

Jets coach Todd Bowles, a defensive specialist if ever there is one in the NFL, must have been savoring the moment Eric Rowe came onto the field to replace injured Eagle cornerback Chris Maragos.

Several times in the second half the Jets attempted to take advantage of the rookie, but Rowe stood tall breaking up a Ryan Fitzpatrick pass to Devin Smith along the sideline in the third quarter.

Then the second round draft choice out of Utah, who was taking the first defensive snaps of his career, made a spectacular interception on a Fitzpatrick ball intended for Smith in the end zone later in the third quarter.

For all intents and purposes, Rowe’s interception was the difference in the Eagles’ 24-17 win.

“It’s a big boost of confidence,” Rowe said afterwards. “Because I really haven’t gotten a chance for any coach to call my number, so it was like, ‘This is it, it’s finally my time to get out there.’Maybe he thought I was a rookie and was trying to throw me up top, so it was a big confidence boost.”

Rowe wasn’t the only one who’s confidence was uplifted by his two highlight reel plays.

“He should have had two [interceptions],” cornerback Nolan Carroll said of Rowe. “The first one he had in his hands and I guess he dropped it. He made up for it the second time. I guess Fitzpatrick thought he could try him again just because he’s a young guy, but he made him pay for it.”