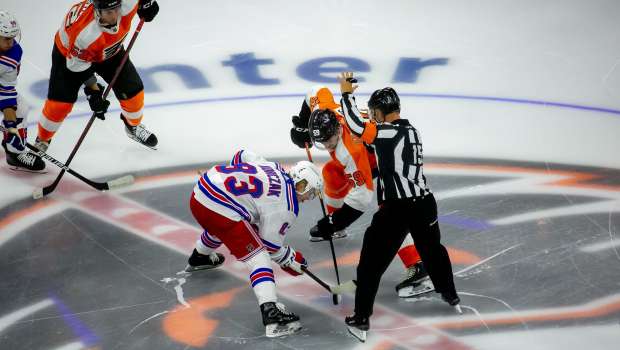 Tyson Foerster scored 33 seconds into sudden death overtime to lift the Flyers to a 2-1 win over the New York Rangers in the front end of back-to-back Rookie Series games at the PPL Center in Allentown.

Rookie games are not about systems and structure, but Ian Laperriere’s squad outworked their New York counterparts noticeably, especially in a lopsided third period. The Flyers outshot the Rangers by a 35-21 margin for the game (33-19 in regulation) including a 13-4 disparity in the third period.

The game was scoreless until 5:33 of the second period, when Rangers’ defenseman Matthew Robertson tallied a center point power play goal with traffic in front. Olle Lycksell knotted the score at 1-1 at 13:30 of the middle frame off aqq counter rush. From the right wing, Lycksell snapped a shot that beat Boyko inside the far post. The game remained 1-1 until Foerster’s overtime winner.

Nolan Maier started the game in goal for the Flyers, stopping 11 of 12 shots. Dylan Garand started for the Rangers, denying all 11 shots he faced. Both teams switched goalies at 10:22 of the second period. Jonathan Lemeiux saw just nine shots, stopping them all to earn the win. Boyko stopped 24 of 26 in a losing effort.

The Rangers went 1-for-2 on the power play. The Flyers were 0-for-3 including a two-man advantage in the second period that lasted 1:55.