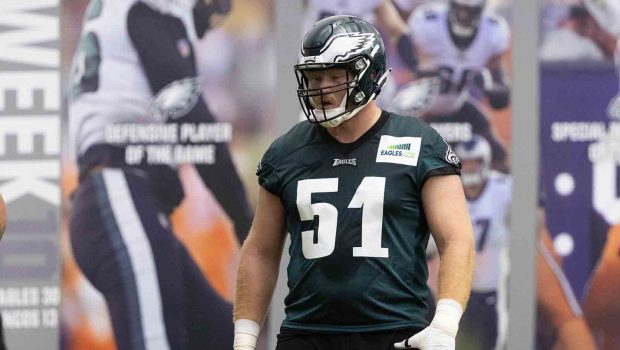 Eagles rook center Cam Jurgens will be getting an early test Friday night when the Eagles play the Jets at the Linc.

Jason Kelce underwent arthroscopic surgery on his right elbow yesterday intended to relieve discomfort the veteran center has been experiencing in training camp.

The Eagles did not announce any timeline for recovery, but according to various medical sites the rehab for an elbow scope can range anywhere from two to eight weeks.

The Eagles are optimistic Kelce will be cleared to return in time for the regular-season opener against the Lions in Detroit on Sept. 11. That’s 33 days away, or just under five weeks.

Kelce, 34, is beginning his 12th season with the Eagles and has started 122 consecutive games going back to a sports hernia in 2014.

The last time Kelce missed a game was Oct. 26, 2014, when the Eagles lost to the Cards in Arizona. David Molk started the four games Kelce missed in the middle of 2014.

Kelce missed the first two days of training camp and was limited the third day while in COVID progression, and rookie Cam Jurgens, the second-round pick from Nebraska, filled in at center.

Jurgens, who’s having an excellent camp, will take over for Kelce as long as he’s out.