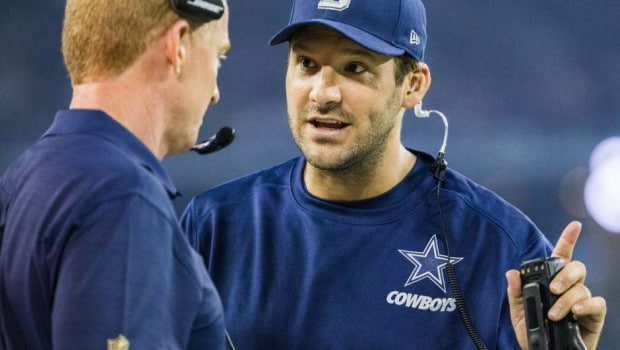 ROMO OUT VS. EAGLES: COWBOYS MAY BE TOAST EVEN WHEN HE’S BACK!

Darren Woodson became the 21st member of the Cowboys Ring of Honor on Sunday. In his honor, the defense produced its first turnover in more than a month.

Is there any reason not to induct Tony Romo this Sunday against Philly? The offense might feel emboldened to score a touchdown.

In fact, while there are news reports of Romo throwing on the side now in practice, I think a setback that holds him out until December would be enough to enshrine him in Canton, Ohio.

The longer fans go without seeing Romo, the closer to Staubach-Aikman status he climbs. Who’s the last person to disappear and become this much more interesting?

(Just give me your age, I’ll throw a reference at you.)

The Cowboys have been forced to play without Romo before, but they have never wheezed and sputtered quite like this. In fact, nobody really does.

Pittsburgh, Indianapolis, even Cleveland, have won games with backup quarterbacks this season. You could argue that the Jets and Washington, second-place teams at 4-3 and 3-4, respectively, have played all season with quarterbacks who were expected to be backups this summer.

It’s not impossible. It’s not a season-ender to lose your starter.

When Tom Brady was lost for 2008 in the season opener, the Patriots still posted an 11-5 record. I believe Matt Cassel was their quarterback.

The Cowboys were 6-9 without an injured Romo coming into this season. That record now sits at 6-14 as this team has settled into the NFC East basement with its inability to achieve even the most modest success without their leader.

As tight end Jason Witten said of Romo on Sunday, “There’s no denying what kind of player he is, but we should still be able to go out and win games.”

Or how about a game? Singular.