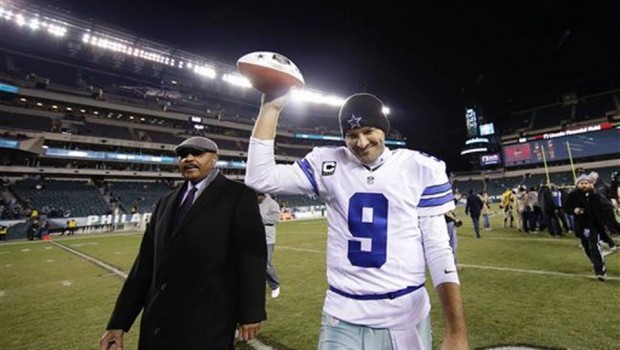 ROMO ON BEATING EAGLES: ‘COWBOYS FEEL LIKE WE SHOULD WIN’

Or first December when his quarterback chops have been called into question.

But after the Cowboys beat the Eagles 38-27 at the Linc on Sunday night, Romo had an answer:

“This team feels like we should win. Part of it is growth and due to experience and having success. We get in these games, we feel very comfortable because we have multiple people we can rely on to do their job play in and play out.”

The Cowboys, a team picked by most experts to finish below .500 after three straight 8-8 seasons, have won 10 games for the first time since 2009 and lead the NFC East by one game over the Eagles.

The Cowboys don’t need any help to make the playoffs. If they beat the Indianapolis Colts on Sunday and Washington Redskins in the final game, they’ll win the NFC East title for the first time since 2009.

But if they lose either one of their final two games, the Cowboys could miss the playoffs despite an 11-5 record.

Jason The Cowboys, who led 21-0 four seconds into the second quarter, trailed for the first time, 24-21, on a 1-yard touchdown run by Darren Sproles midway through the third quarter.

This is when we’ve seen countless Cowboys teams fade since Garrett became the head coach eight games into the 2010 season.

This team has proved it’s different.

Each occurred on the road, so there was no panic when Romo led his team onto the field, and he didn’t deliver any motivational speeches on the sideline or in the huddle.

“In Seattle, they came back. We were on the road. They were hooting and hollering, and the place was going crazy,” Romo said. “You put your head down and go execute.

“You gotta make some plays and [a] couple of guys have to step up, but you don’t let whole environment and the way things have gone affect you.”

The Cowboys drove 78 yards in eight plays, silencing the rowdy throng of Eagles fans, on a 2-yard run by DeMarco Murray to take a 28-24 lead.

Then, the defense, which had yielded four straight scoring drives, forced a turnover.

J.J. Wilcox made a juggling deflection of a tipped pass at the Philadelphia 40. Four plays later, Bryant caught a 25-yard touchdown pass — his third of the game — as the Cowboys took a 35-24 lead.

The Cowboys blew a 26-3 halftime lead at home to the Green Bay Packers last season in a game quarterback Aaron Rodgers didn’t play, and they had blown a fourth-quarter lead on several occasions under Garrett because they didn’t play the game the right way.

Murray finished with 81 yards on 31 carries. He carried eight times for 12 yards in the fourth quarter, milking precious time off the clock.

The Cowboys kept the ball for 41:55 minutes and limited Philadelphia’s offense to 54 plays. Philadelphia ran 77 plays in its 33-10 win over Dallas on Thanksgiving Day.

A rested defense contributed three sacks and two turnovers in the fourth quarter.