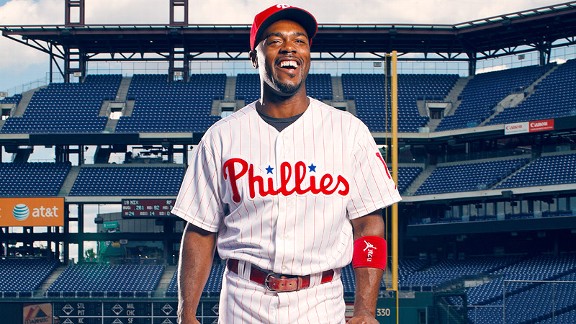 ROLLINS SEES DODGERS AS ‘WHERE WE WERE IN PHILLIES’ RUN’

The Dodgers not only got a slick-fielding shortstop who still has some pop in his bat, but they also got a guy who will lead in the clubhouse and on the field.

Former Phillie Jimmy Rollins said he spoke with manager Don Mattingly and understands that the very nature of his position in the infield brings a responsibility he embraces.

“Most definitely,” he said. “The shortstop position, if you accept everything else that comes with it, you’re already there in the position of being a leader.

“In 14 years, I have the experience of winning a World Series, losing a World Series, being in the playoffs. Had successes and failures and there’s a lot I can provide. When things go a little crazy, I can bring stability. I’ve been in situations where we didn’t have a leader. I can be the glue to make sure things work.”

Rollins, 36, came to the Dodgers for minor league pitchers Tom Windle and Zach Eflin. He has one year and $11 million left on his contract, with the Phillies paying $1 million of it. He had trade veto rights as a 10-and-5 vet, but when the season ended told the Phillies he would approve trades to the Dodgers, Yankees and Mets.

The 2007 National League MVP Award winner said he isn’t worried about proving himself to a new audience.

“All I have to do is go out, be a leader of the squad and win,” he told MLB.com. “It’s a cliché, but everything else takes care of itself. Fans will get to know who you are by what you do on the field and you hope they fall in love with what you bring to the table.”

So, why go to the Dodgers?

“It’s west, one,” said Rollins, who is from Alameda, right across the bay from San Francisco. “But most importantly, they’re like where we were in our run. Maybe even slightly younger than when we were in the middle of our run. They have a great staff. They have a team over there that is built to win right now. And that’s what is important, going out there every day knowing that you’re going to compete with a chance to win — and not just win April through September, but a chance to win in October.”

Rollins said the last year of this contract won’t be his last year.

“Oh yeah, I’m going to play beyond this year,” he said. “Hopefully I’ll go out and have a fantastic season this year and the Dodgers will want to give me an extension to stay on the West Coast.”