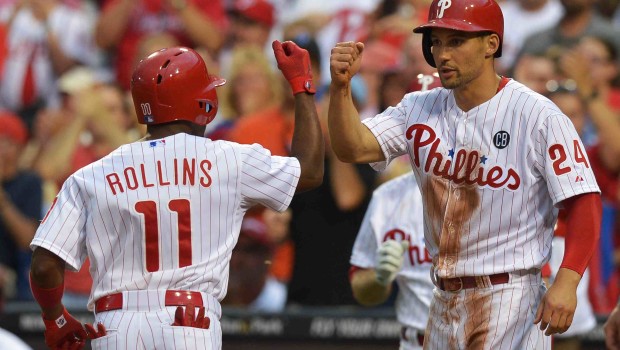 ROLLINS KEEPS THE PHILLIES ON A ROLL

With the Phillies, the more things change the more they remain the same.

They waxed the Nats 6-2 Friday night at Citizens Bank Park, their fifth consecutive victory. And yet, they are still in the cellar of the woeful NL East at eight games out of first. But after a hitter’s meeting in Milwaukee, the offense is revved up. The bullpen is getting it done. Cliff Lee is on the cusp of returning. As Friday winner A.J. Burnett put it, the team is “clicking on all cylinders.”

They may be eight games out, but the Phillies have the wind at their back once again. And with five cracks at the top two teams in the division over the next five games, the clubhouse is full of believers.

“Playing this way we can,” Jimmy Rollins said of this group’s chance of winning the division.

Five games will not change a season’s worth of indicators that the Phillies will be sellers at the July 31 non-waiver trade deadline, but, at the very least, those on the field are making it difficult for those upstairs.

“I think the decisions have already been made, things that they want to do,” Rollins said. “And regardless of how we play, they’re still going to make their decisions for the future of the team. Not just for now. So we got out there, we play ball, we win, good things happen, and if that makes things difficult, then it does.”

Rollins was front and center in making things difficult for general manger Ruben Amaro Jr. and company on Friday night. The shortstop belted his 10th and 11th home runs of the season for his ninth career multihomer game and first since Aug. 1, 2012, at Washington.

After hitting just six home runs last year, Rollins said the only difference in 2014 had been finding his stroke.

“That simple,” Rollins said. “Not any stronger. Just being able to get to that stroke. Being able to catch the ball in the right spot and get some good flight on it. Picking pitches. Getting situations where they’re giving me the pitch and capitalizing.”

Domonic Brown helped to build Philadelphia’s lead in the third when he laced a two-run double off All-Star Jordan Zimmermann. Brown is still batting just .225, but his .338 average with runners in scoring position has translated into 46 RBIs, good for second among all NL outfielders.

Burnett, meanwhile, gave a vintage performance. He put a single runner on base in each of the first six innings, but the Nationals were not able to inflict any damage against the 37-year-old righty until Bryce Harper’s seventh-inning home run.