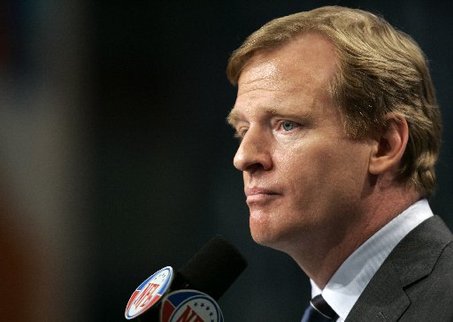 DOES ROGER GOODELL THINK WE ARE ALL IDIOTS?

In a culture built on phony outrage, Ray Rice’s assault on the woman who would become his wife and the NFL’s reaction to it are the very definitions of real outrageousness.

And, as usual, the Washington Post’s Sally Jenkins has the best and correct reaction:

” … The Ravens promptly terminated Rice’s contract on Monday and [NFL commissioner Roger] Goodell, ever in pursuit of a stainless suit-coat, reopened the case and suspended Rice indefinitely under his revised policy on domestic assault, given this graphic “new” evidence. But really, what did Goodell and the Ravens think a professional football player knocking his wife unconscious looked like?

“That Goodell is an unduly vain commissioner, and a self-serving one with his eye on some further prize, has always been obvious. That he obfuscates and evades on tough issues unless they are convenient for him, that his convictions are highly selective and so is his enforcement, has never been more apparent. On Monday morning, with the surfacing of that video, Goodell’s nature became totally clear. The NFL claims in a statement that no one in the league office had previously seen the tape. That is almost surely not the truth, unless the NFL wanted it that way. This is a league that works with Homeland Security, confers with the Drug Enforcement Agency, collaborates with law enforcement and has its own highly equipped and secretive private security arm. You’re telling me it couldn’t get a hold of a grainy tape from an Atlantic City casino elevator? But TMZ could?

“If NFL executives and Baltimore Ravens staff had never seen that tape before, there are only two reasons: willful blindness, and the determination to maintain plausible deniability. Two NFL analysts with reputations for impeccable sources, Peter King of Sports Illustrated and Chris Mortensen of ESPN, were told months ago the league had to have seen the tape. Ray Rice’s own attorney had a copy of it. It simply defies belief that league and team officials couldn’t have seen it if they wanted to.

“All the tape does is put the full lie to the specious reasons the NFL and the Ravens offered for being lenient on Rice — he was defending himself, there were extenuating circumstances, he felt terrible about the incident. And of course, the woman partly had it coming. “Janay Rice says she deeply regrets the role that she played the night of the incident,” the Ravens tweeted.

” … Did Goodell and so many others in the NFL really need to see the tape before they were properly horrified? It’s impossible to reread the letter Goodell sent to NFL team owners describing his change of heart on domestic violence on Aug. 28 with anything but a rueful, bitter hilarity. ‘The reality is that domestic violence and sexual assault are often hidden crimes, ones that are under-reported and under-acknowledged,’ Goodell wrote. You bet they are, especially if the videotape is buried.

“On Monday, Goodell’s audience found itself in the position of questioning the sincerity of his apology for behaving in a way that led to his sincerity being questioned. For years now, NFL players have questioned his sincerity on issues like concussions, player safety, discipline and drug testing. With the Rice scandal, the full football viewing public will likely now view Goodell through the same skeptical lens.”