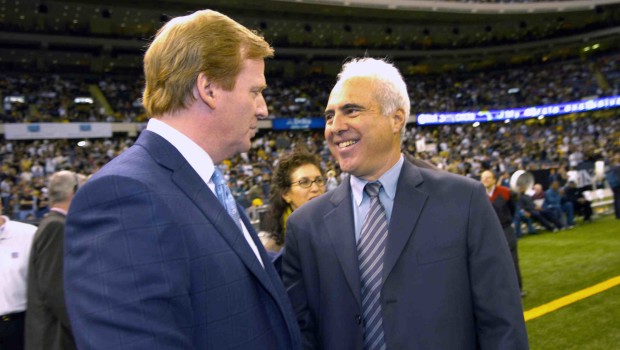 ROGER GOODELL, COMMISH OWNERS WOULD LOVE TO FIRE BUT WON’T!

Roger Goodell (above with Eagles owner Jeff Lurie in evidently happier days), who is never going to get another term as NFL commissioner and might not last his current one the way things are going, ought to give it up now, but won’t.

So when Manhattan Federal Court Judge Richard Berman shot Goodell, and the owners whose bidding he does, and the league’s case against Tom Brady, out of a cannon on Thursday, that should have been the merciful end of Deflategate.

But Goodell and the owners who backed him on this won’t give up, or give in, as they cling to powers given to them in the league’s collective bargaining agreement like fading despots. So they appeal Berman’s decision. They keep fighting, and it doesn’t matter that they look like sore losers.

Just that they look like losers. Maybe what Berman really did on Thursday with his decision about Brady of the Patriots was make Goodell and everybody on his side of this look like the Jets.

“I think Goodell is in trouble,” Jay Reisinger, one of the smartest sports attorneys in this country, out of Pittsburgh, said late Thursday afternoon.