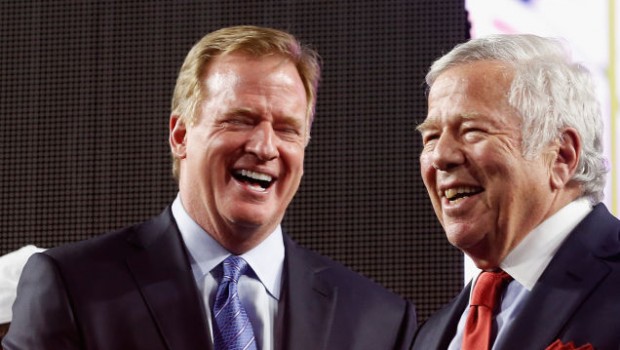 The ripple effects of the bombshell penalties imposed on Tom Brady and the New England Patriots just keep on spreading:

Who will replace Brady at QB for the Patriots’ first four games?

What will the line say with Brady not in the first-game lineup? Hint, they were 6-point faces over the Steelers and now they are just 1.

Is this the end of the Roger Goodell-Robert Kraft love affair?

A report from Bleacher Report’s Mike Freeman, who spoke to an NFL owner who agreed with the discipline:

The owner said he believes (but made it clear it’s just his opinion) that the relationship between Goodell and Kraft is “pretty much dead.”

“I can’t say for certain but it sure seems that way to me,” the owner, who knows both men well, explained. The owner added: “Some of us (owners) are waiting a little nervously to see what Robert does next.”

Brady will appeal his four-game suspension. But Kraft has no internal recourse to fight the Patriots’ two docked draft picks and $1 million fine, because arbitration is something contained only within the CBA negotiated with players.The NFL constitution and bylaws classify Goodell’s disciplinary decision here as “final, conclusive, and unappealable.”

It is unlikely because of the precedent it would set (or more accurately, revive; Al Davis was the last owner to sue the NFL, and won), but if Kraft is furious enough with this ruling, he could go outside the league altogether and file a lawsuit against the NFL. But in Kraft’s statement on the penalties, he appears to have backed off his earlier promise to accept the league’s imposed discipline:

“Despite our conviction that there was no tampering with footballs, it was our intention to accept any discipline levied by the league. Today’s punishment, however, far exceeded any reasonable expectation. It was based completely on circumstantial rather than hard or conclusive evidence.

“We are humbled by the support the New England Patriots have received from our fans throughout the world. We recognize our fans’ concerns regarding the NFL’s penalties and share in their disappointment in how this one-sided investigation was handled, as well as the dismissal of the scientific evidence supported by the Ideal Gas Law in the final report.

“Tom Brady has our unconditional support. Our belief in him has not wavered.”

(Brady’s agent, Don Yee, released his own statement, declaring that “the discipline is ridiculous and has no legitimate basis…there was no fairness in the Wells investigation whatsoever.”)

The league threw the book at the Patriots for the worst and most absurd reasons. Two specifically named in the statement announcing the discipline was Brady’s and the team’s failure to self-incriminate, as if any employee should ever cooperate with an investigation ofhimself; and the fact that the Patriots are considered repeat offenders for something that happened eight years ago, even though the NFL went out of its way to make clear that Ballghazi didn’t extend to the echelons of the organization that would have been involved with Spygate.

Goodell has been getting away with his arbitrary and unjustifiable judgments for a long time, because he’s always known he has the backing of the handful of owners that matter. Now he’s going after one of them, and that bears close watching. It’s still early in this farce, but no marionette has ever been well-served by attacking its own puppeteer.