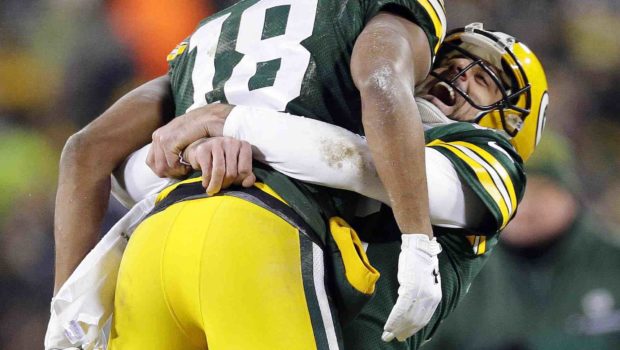 RODGERS AND PACKERS ROLL GIANTS 38-13 — COWBOYS NEXT UP!

Aaron Rodgers overcame early struggles to throw four touchdown passes, three of which went to Randall Cobb, and rally the Green Bay Packers to a 38-13 win over the New York Giants in the NFL wild card.

Green Bay advances to face the top-seeded Dallas Cowboys next Sunday. The Atlanta Falcons will host the Seattle Seahawks on Saturday in the NFC’s other divisional matchup.

Rodgers was ineffective in the first half before the Packers’ final two drives. But he found Davante Adams on an 8-yard touchdown and then uncorked a 42-yard Hail Mary to Cobb in the back of the end zone to put the Packers up 14-6 at halftime.

Packers coach Mike McCarthy came under fire after Green Bay was stuffed on a fourth-and-inches run on its own 43-yard line. Eli Manning found Tavarres King for a 41-yard touchdown two plays later to cut the Packers’ lead to one, but Rodgers connected with Cobb on a 30-yard scoring strike on the ensuing drive.

Cobb then tied the franchise and NFL record for touchdown catches in a playoff game when he hauled in his third on a 16-yard catch. Rodgers also tied his career playoff high with his four touchdowns.

New York struggled to keep pace with Rodgers after he broke out. Wide recevier Odell Beckham Jr. struggled with drops throughout the game and finished with just four catches for 28 yards.