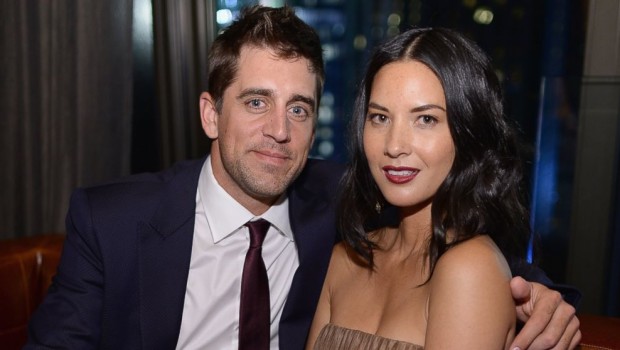 RODGERS, AFRAID OF INJURY, MAY NOT FACE EAGLES AT ALL SATURDAY!

The mounting NFL training camp and preseason injury list has taken such a toll that:

Green Bay Packers’ quarterback Aaron Rodgers may not play at all Saturday night against the Eagles!

After watching Jordy Nelson go down with a season-ending knee injury in Pittsburgh Sunday, maybe Rodgers is planning to spend Saturday night with his squeeze Olivia Munn (photo above).

Given how many snaps Brett Hundley and Matt Blanchard took at practice Wednesday, it looks like Rodgers won’t be playing that much at all. The third exhibition game is usually the one the starters play the most, but with three starting offensive linemen likely to sit out McCarthy may have already made the decision to limit Rodgers or sit him out entirely.

If he doesn’t play, Rodgers said it would not be a big deal.

He has played 47 snaps with the No. 1 offense in two games, leading five drives. The result of the drives was: two failed fourth downs, a field goal, a touchdown and a safety.

Rodgers said he has had enough snaps to be ready for the season opener against Chicago.

“In order to be a good offense, you have to innovate every, single year,” Rodgers said. “You have to evolve and make sure you’re making subtle changes to kind of stay ahead of the scouting. We’re doing a good job with that.

“We’re right where we need to be. We’ve had some productive drives when we’ve been out there. I’m happy where we’re at.”