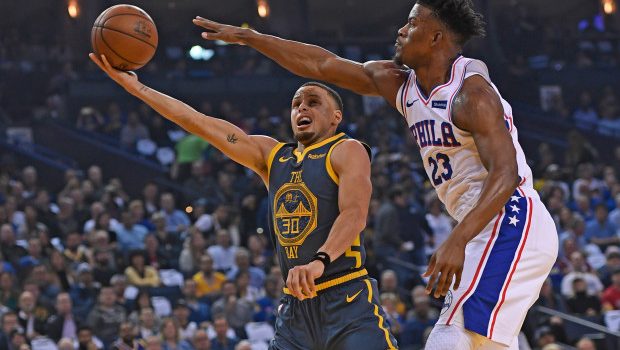 Joel Embiid had 26 points and 20 rebounds to spoil DeMarcus’ Cousins’ home debut with the Warriors, and the visiting Sixers snapped Golden State’s NBA-best 11-game winning streak with a 113-104 victory.

The Sixers hadn’t beaten the Dubs in nearly six years.

Ben Simmons also scored 26 points and JJ Redick added 15 points for the Sixers, who grabbed 16 offensive rebounds to give them 10 or more in five straight games and 11 of 15.

“It’s a fantastic win. This group — myself included — we have not beaten Golden State,” 76ers coach Brett Brown said. “To do it on the road, to do it in front of their fans against a team that is this good and had won that many in a row, it is a good night.”

Embiid missed all five of his 3s and committed eight turnovers but also had five assists and two steals.

“I wanted that matchup,” Cousins said.

Kevin Durant hit a 3-pointer with 4:52 remaining to trim the deficit to 102-96, but Draymond Green fouled moments later and received a technical for arguing.

Durant finished with 25 points on 11-for-24 shooting but missed seven of his eight 3-point tries.

Curry’s baseline 3 with 2:46 remaining cut the lead to 106-101, and he hit another with just more than a minute left to make it a six-point game.

Curry shot 14 for 27, 10 of 18 on 3s, and knocked down a long 3 midway through the first while doing a scissor-kick in the air before throwing his arm up to celebrate moments later.

“Shots didn’t fall in the second half,” Curry said. “They didn’t get frazzled by any of our runs.”

Golden State’s Alfonzo McKinnie hit all five of his shots for 11 points making his first career start in his 56th game after Klay Thompson was a late scratch because of an illness.

Cousins went 3 for 10 and played 25 minutes in his sixth game overall since coming back from surgery to repair a ruptured left Achilles tendon he hurt last January with New Orleans.

“Obviously I’m still not where I want to be,” Cousins said. “… I’m working my tail off. Just be patient.”

The Sixers went ahead 95-84 late in the third on Embiid’s basket, outscoring Golden State 42-26 in the quarter.

Golden State, which has a double-digit winning streak for the sixth consecutive season and is coming off a 5-0 road trip, shot 46.6 percent and was 11 of 38 from deep.

The Warriors had their 10-game winning streak against the Sixers snapped, along with a six-game unbeaten run in the series at Oracle.