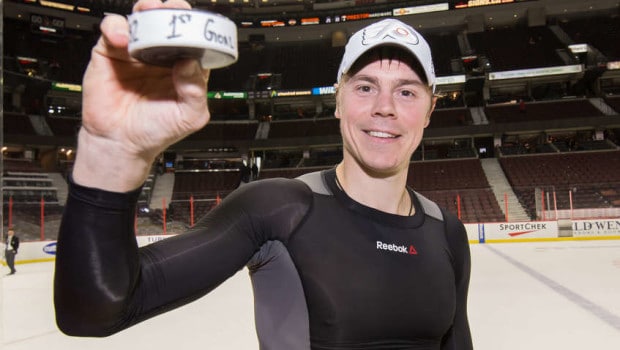 Evgeny Medvedev, 33, scored his first NHL goal for the Flyers.

Break up the unbeatable Flyers!

Wayne Simmonds scored the winning goal late in the second period, and Steve Mason made 23 saves to help the Flyers defeat the Ottawa Senators 4-2 Tuesday night.

“We haven’t won too many in a row,” Simmonds said. “We’re starting to build our confidence. We’re starting to roll now. You can really tell. Everyone’s got their head up no matter what happens. They score a goal, and everything is fine. We know we’ve got a good team here. We just have to continue the way we’ve been playing and support one another.”

Zack Smith and Mike Hoffman scored for the Senators. It was Hoffman’s seventh goal in the past seven games.

Craig Anderson made 29 saves for Ottawa, which has been outshot in 17 of 24 games this season.

The Flyers lost eight out of nine games to end October and start November, but they have at least a point in seven of their past nine games (5-2-2).

“It was a little bit tough, but we’re a team, we’re a family in here,” Simmonds said. “No matter what, we’ve got to stick by each other’s side. It doesn’t matter what criticism we’re getting, wherever it’s coming from, external sources, we just have to stick together in here. As long as we’re all right with each other, it doesn’t really matter.”

Simmonds scored the winner at 16:35 of the second period, putting in his own rebound off an odd-man rush. It started when Ottawa defenseman Erik Karlsson pinched at the Philly blue line and got the puck, but his pass failed to find the mark, and the Flyers broke back the other way.

“Wayne Simmonds has been a guy who has really been setting the bar for us, I think, the last few games,” Flyers coach Dave Hakstol said. “I thought he was real good again tonight, not just because he’s got a couple of points. I think he’s playing at a real strong level. He’s one of our leaders, and that’s what our guys would expect.”

Senators forwards Milan Michalek and Mika Zibanejad were injured and did not finish the game. Michalek left in the second period after being hit in his hand with a shot by Flyers defenseman Radko Gudas. Zibanejad was hit in the face by Gudas’ right arm off a faceoff early in the third period.

Senators coach Dave Cameron said Michalek is “going to be out for a while.” Zibanejad was kept out of the game for precautionary reasons; his condition will be updated Wednesday.

Ottawa was coming off a three-game Western Conference road trip that ended with an overnight flight on Sunday.

“I think we were tired today,” Karlsson said. “I think you could feel that. Unfortunately, the way it is sometimes. They did a tough job on us. I think we created enough scoring chances to win, but we couldn’t put the puck in the net.”

The game was tied 1-1 on goals by Gostisbehere and Smith after an evenly played first period, but the Flyers dominated the second period, scoring on two of their 18 shots to take a 3-2 lead.

Medvedev, 33, scored his first NHL goal just as a penalty to Michalek for roughing expired at 3:14 to put the Flyers ahead 2-1.

Hoffman tied it again 76 seconds later when he converted a 2-on-1 down low off a pass from Bobby Ryan.

The Senators had an apparent goal disallowed at 15:33 of the second when it was ruled Ryan deflected the puck into the net with a high stick.

Mason made 12 saves in the third with the Senators pushing to try to tie the game.

Hakstol said there haven’t been any big adjustments to the Flyers’ game to turn things around.

“Just staying with the little things,” he said. “There’s nothing special about what we’re doing. We’re working hard. We’re playing together. The guys are having fun when you have a little bit of success. It all comes back to just sticking together, playing hard and trying to take care of the little things, and guys are doing that.”