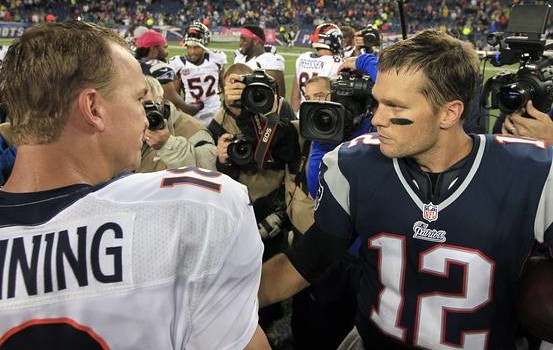 The Patriots’s Brady (left) faces the Broncos’ Manning on Sunday.

This Sunday’s AFC and NFC title games feature three quarterbacks who were selected No. 1 overall in the draft – and Tom Brady, the 199th overall pick in 2000.

After leading the Patriots to a win over the Chiefs and quarterback Alex Smith (No. 1 overall in 2005), Brady will have to beat Peyton Manning (No. 1 overall in 1998) and either Cam Newton (2011) or Carson Palmer (2003) to win his fifth Super Bowl title.

Of course, it’s probably a situation that Brady relishes. He is the most obvious counter-point to the argument that teams have to draft a quarterback high in the first round to become a Super Bowl contender.

Brady has victories over 11 No. 1 overall picks at quarterback, including Manning, who he has beaten 11 times in 16 tries (2-2 in the postseason).

Brady has beaten every No. 1 overall quarterback he’s ever faced except Newton, who won 24-20 in their only career meeting in 2013.

Brady actually has a better regular-season record against top-drafted quarterbacks (31-8, .795 winning percentage) than against all other passers (141-43, .766). But it’s been a different story in the postseason as he’s just 5-4 with all four losses coming against Mannings — two to Eli in Super Bowl losses to the Giants to cap the 2007 and 2011 seasons and the other two to Peyton, including a 26-16 defeat in the AFC Championship game also in Denver two seasons ago.