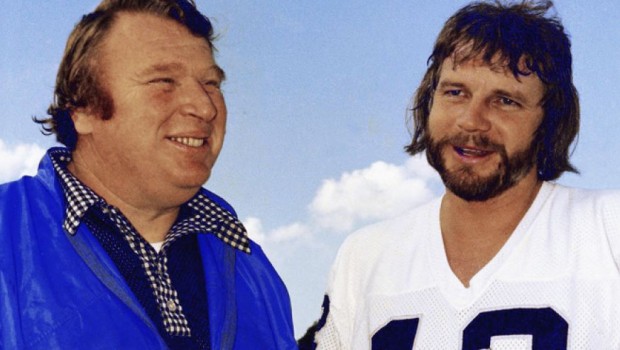 RIP KENNY STABLER: WHY ISN’T HE IN THE HALL OF FAME?

“I was head coach of the Raiders the entire time Kenny was there and he led us to a whole bunch of victories including one in Super Bowl XI. I’ve often said, If I had one drive to win a game to this day, and I had a quarterback to pick, I would pick Kenny. Snake was a lot cooler than I was. He was a perfect quarterback and a perfect Raider. When you think about the Raiders you think about Ken Stabler. Kenny loved life. It is a sad day for all Raiders.”

The Snake was terrific during his era. A member of the All-Decade Team of the 1970s — and one of the few on the prestigious squad not enshrined in the Hall — Stabler won both a league MVP (1974) and a Super Bowl (XI). He posted the second-highest passer rating (103.4) of the decade in 1976 and led the NFL in yards per attempt during the 1970s (7.7), while placing third in touchdown passes. All this, despite not earning the starting nod from Raiders coach John Madden (left in above photo with Stabler) until mid-1973.

If you were a disco kid of the ’70s, and packing a star-laden team from your Topps football cards, you wanted Roger Staubach, Terry Bradshaw, Stabler, Fran Tarkenton or Bob Griese at quarterback — probably in that order. Four of the five are in the Pro Football Hall of Fame. The best lefty this side of Steve Young is not.

Check out the whole piece: