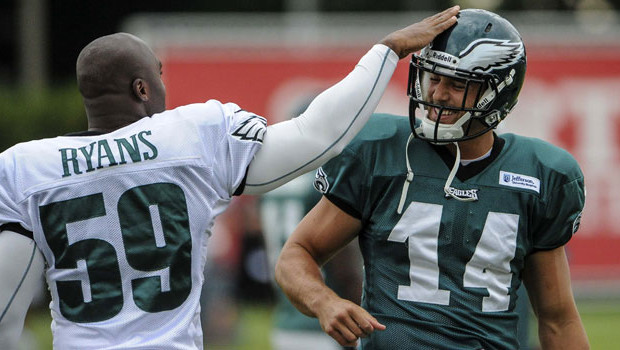 RILEY COOPER NEEDS TO COME UP EVEN BIGGER FOR EAGLES

Riley Cooper was embroiled in controversy last year, but he was able to put the situation behind him and produce a career season for the Eagles.

Cooper totaled 47 catches for 835 yards and 8 TDs in Jeremy Maclin’s absence and will take on an even bigger role in Chip Kelly’s offense with DeSean Jackson in D.C. The media whirlwind that followed his racist remark caused a big distraction, but Cooper says the support of his teammates allowed him to focus on football.

“Obviously, I was very embarrassed. I’m still embarrassed about the situation,” Cooper told NFL Media’s Michael Irvin on Thursday as he sat out with a slight foot injury. “Words hurt, and I’m crushed by it. But it felt good to know my teammates were supporting me. Just a simple, ‘Hey Coop, I’m here for you man’ or ‘Hey, praying for you man.’ ‘Hey, I got your back.’

“It meant a lot to me,” Cooper continued. “That was a huge deal, nationwide. That is a big deal. And to have the support from the guys that know ya, it meant a lot.”

Cooper was a big part of the Eagles’ surprise ascent to the NFC East crown, and he was rewarded with a five-year, $25 million deal. The University of Florida product says he played the season like he owed his teammates something.

“Luckily that’s the way I always approached it, and they see that. Luckily, they know,” Cooper said. “I’m not the fastest guy. I don’t have the best hands. I’m not the best route-runner. But they know that I play hard, and I’m gonna do everything I can to go get that ball and make those acrobatic catches.”