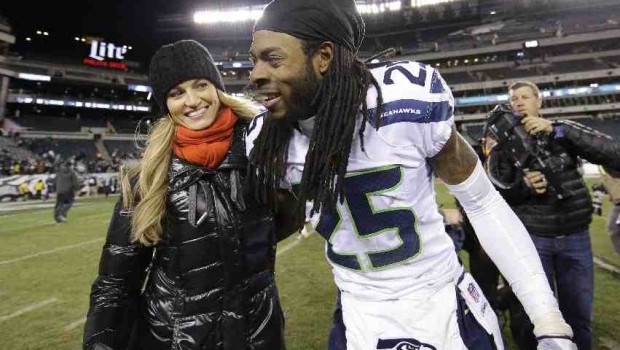 RICHARD SHERMAN LIVES UP TO THE HYPE AGAINST EAGLES

Seattle’s Richard Sherman may be the best cornerback in football, as he demonstrated in the last Super Bowl against Denver, and he isn’t afraid to brag a bit.

Yesterday, he backed it up against the Eagles.

“It comes down to match-ups,” Sherman said. “Earlier in the week, everybody brushed me off when I said they had to deal with us just like we have to deal with them. You can hurry up all you want, but if you can’t complete passes, it’s just quick three-and outs. That’s what we were able to do.”

Sherman took Maclin out of his game and crowed to Erin Andrews afterward (top photo).

At one point in the game when the crowd was booing, Sherman stood near the sideline and signaled with his hands for them to boo more. He also had a few words with Eagles receiver Jeremy Maclin, who had only three catches for 21 yards, but one was a touchdown.

“He was complaining a little bit,” Sherman said of Maclin. “He’s a good competitor and it was fun. You enjoy the hostility. It kind of motivates you. They have great fans and they’re passionate. You appreciate that.”

Sherman said he felt in control of the game from start to finish.

“This is one of our better games,” he said. “You saw it. If you can be ready when they’re ready, see your indicators and understand their play concepts, you can get them off the field.”