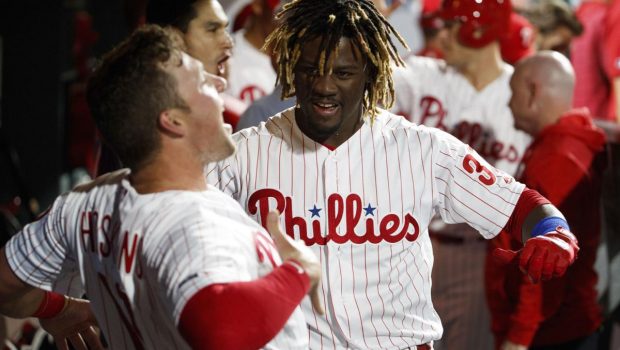 Rhys Hoskins hit two solo homers, including a tiebreaker in the last of the sixth, and the Phillies beat the visiting Washington Nationals 4-3.

Hoskins added an insurance run in eighth with a homer off Justin Miller to make it 4-2. It was the fourth multi-homer game of Hoskins’ career.

The first homer came off Anibal Sanchez (0-1), who was making his second start for the Nationals after coming over from the Atlanta Braves. He gave up seven hits and three runs in 5 2/3 innings with six strikeouts and two walks.

Harper has reached base in his first nine games and has 11 walks with three homers. He hit a homer in his first game at Nationals Park off Jeremy Hellickson last week.

Odubel Herrera hit a two-run homer to tie the game at 2 in the fourth for the Phillies. His homer came after J.T. Realmuto reached on an infield single.

Washington catcher Kurt Suzuki hit a two-run homer in the second to give Washington a 2-0 lead.

The winning pitcher was Seranthony Dominquez (1-0), who threw a scoreless sixth. Adam Morgan pitched a scoreless seventh and David Robertson had a shutdown eighth for the Phillies. Pat Neshek pitched the ninth, giving up a homer to Brian Dozier to lead off the inning.

Anthony Rendon then doubled before Neshek got the final three outs for his first save, getting Suzuki for the last out on a fly ball with Rendon on third.

The Nationals entered the game with the worst bullpen ERA in the majors at 10.80. Opponents were hitting .365 against Washington relievers, also the worst mark in the majors. The Washington bullpen has allowed six homers this year.