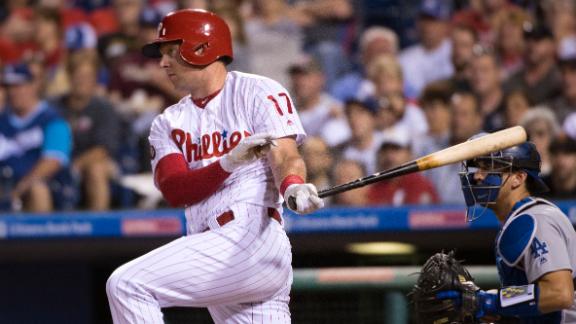 Rhys Hoskins had four RBI, including a tie-breaking, three-run double off Pedro Baez in in the seventh inning that led the Phillies over the Dodgers 6-2.

“They’ve got a lot of speedy guys. They put the bat on the ball. They’ve got some power,” Dodgers manager Dave Roberts said about the Phillies. “They play hard, and teams that have nothing to play for but are trying to establish themselves, those are dangerous teams.”

The Phils have won seven of 10 and need three victories to avoid a 100-loss season.

“Experience-wise, for some of us young guys, this is pretty invaluable,” said Hoskins, who has 43 RBI in 39 games since his Aug. 10 promotion from Triple-A Lehigh Valley.

Hoskins chased Yu Darvish with a sixth-inning RBI single that cut the Phils’ deficit to 2-1, then doubled to the left-center gap on the 10th pitch of his at-bat against Baez (3-6) for a 5-2 lead.

“I harped earlier in the season about not getting innings from the starters,” Phillies manager Pete Mackanin said. “He gave us those innings and allowed us to use the bullpen the way I want to use it.”

Yasmani Grandal hit his 20th homer in the third and Curtis Granderson had an RBI double in the fourth.

Darvish allowed no earned runs for the second straight start, giving up one run and four hits in 5 1/3 innings.