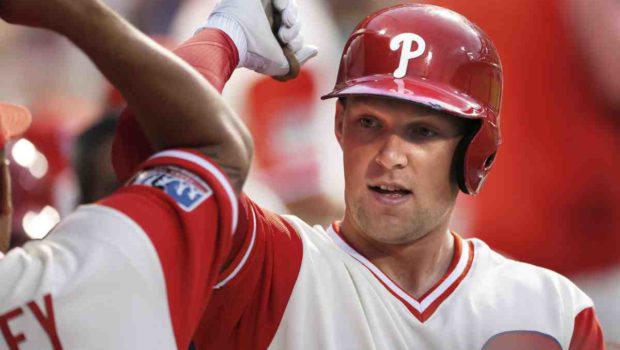 That is, the glow from the Phillies rookie has spilled over to the worst-in-the-majors big club.

Hoskins homered for the fifth straight game, and his great catch started a triple play in the fifth inning, leading the Phillies to a 6-3 victory over the Chicago Cubs.

Hoskins led off the eighth with a drive to left-center to give him 11 home runs in his first 18 games over 64 at-bats, becoming the fastest in major league history to reach 11 homers. Yankees Shane Spencer and Gary Sanchez, who previously shared the mark for fastest to 11 homers, needed 81 at-bats.

“I don’t think I’ve ever seen a young guy look that profound at home plate,” Maddon said. “Look at his walk to strikeouts. That’s the part that tells me he can sustain, not necessarily this pace, but he can sustain because he doesn’t strike out. He will accept his walks. He doesn’t expand the strike zone. He uses the whole field. He’s a big guy with short movements to the ball. Pretty impressive.”

“He made an error finally at first base to prove he is actually human,” Maddon said.

Hoskins is taking his early success in stride.

“Is anyone having deja vu?” he joked. “To be honest, I’m just coming to the ballpark every day with the same mindset. Good stuff just keeps happening.”

Nick Williams also homered for the Phillies, who have gone deep in nine straight games, hitting 20 homers over that span.

Nick Pivetta (5-9) allowed three runs on six hits in five innings to get the win.Hector Neris worked a perfect ninth for his 16th save in 19 chances.

Anthony Rizzo had a pair of RBI for the NL Central-leading Cubs, who began play three games in front of Milwaukee.