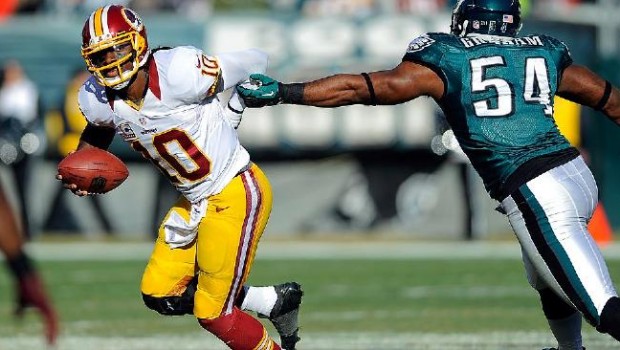 Robert Griffin III got some good news Monday when the Washington Redskins announced they were picking up the fifth-year option on his contract.

But for the injury-prone QB, there is a deep down side.

In fact, it makes it more likely that Griffin will be benched this year.

The option gives Griffin a $16.2 million salary for 2016, and that salary is guaranteed in the case of an injury — but not guaranteed if he’s healthy and the team decides to cut him. Which means that the worst-case scenario, from the team’s perspective, is that Griffin struggles and plays badly enough that they would like to cut him, but he suffers an injury that forces them to pay him anyway.

That means if Griffin struggles early in the season, coach Jay Gruden is going to have a quick hook. The team simply can’t afford to stick with Griffin and risk him blowing out his knee again, which would put them in a position where they’re both looking for a new quarterback next year and on the hook for Griffin’s $16.2 million salary.

Gruden has said that Griffin will enter training camp as the starter, but there’s no guarantee he won’t be benched for Colt McCoy or Kirk Cousins. If Griffin shows early in the season that he’s not up to the job, Washington will get him off the field to protect him from injury — and protect the team from having to pay him next year.