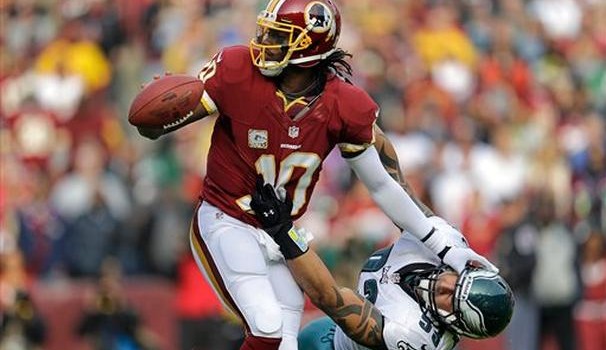 WHICH RG3 WILL EAGLES BE FACING SATURDAY IN DC?

So, Washington Redskins owner Dan Snyder — perhaps the worst team executive in major league sports in this country — has convinced his coach that Robert Griffin III should start this Saturday against the Eagles.

Which RG3 will the Birds be facing in their desperate attempt to keep their postseason hopes alive?

The good RG3 who flummoxed the NFL in 2012 or the bad RG3 who has no confidence, no mobility and no hope to beat them?

Griffin used to be good for at least one good laugh-out-loud quip per week when he wasn’t stirring things up on social media, but his news conference Tuesday was again stocked with rote answers and cliches such as: ”We’ve got to make sure that as a team we go out there ready to play.

”For me, anything that I was saying, whether it was positive or negative, it was getting twisted and turned against me and against this team,” Griffin said. ”I felt like I shouldn’t say very much.”

Griffin has been given the starting job for the third time this season, each time under different circumstances. He was the undisputed franchise QB coming out of training camp, but he dislocated his ankle in Week 2. When he returned, he played poorly and was benched after three games.

Now’s he back once again, getting the call for Saturday’s game as the Redskins (3-11) host the Eagles (9-5) because Colt McCoy has a sprained neck. McCoy was placed on season-ending injured reserve Tuesday.

Coach Jay Gruden said he just wants someone to ”take the position and run with it.” Griffin wouldn’t take the bait when asked about that statement.

”My goal is always to go out there and be the guy,” Griffin said. ”And that’s my only focus. I’m not really worried about anything else.”

Gruden has been candid about Griffin’s play all season, but that’s been the standard mode of operation for the first-year coach. On Tuesday, when the coach was asked why Griffin has struggled to grasp some of the fundamentals of drop-back passing, Gruden blamed it on inexperience, pointing out the lengthy careers of accomplished quarterbacks Eli Manning, Peyton Manning and Drew Brees as compared to third-year QB Griffin.

”This position is very difficult, especially when you’re learning new concepts with a new system,” Gruden said. ”It takes time. So it’s important for us to try and have some success on first and second down so we don’t have to drop back and throw it 30 times a game, and have a lead, so we don’t have to worry about it. But, eventually, when you get behind, you get in third down, you get behind the chains, those have to be accomplished – the drop-back reads and progressions have to be accomplished, and that’s something we’re fighting through right now.”

If Gruden appears to single out Griffin, it’s because that’s the player he’s asked about the most. Here, for example, is what the coach told Philly reporters Tuesday when asked about ex-Eagles receiver DeSean Jackson, whose production has tailed off in recent weeks.

”I’m a what-have-you-done-for-me-lately kind of guy,” Gruden said, ”and lately we haven’t seen the DeSean we need to see.”