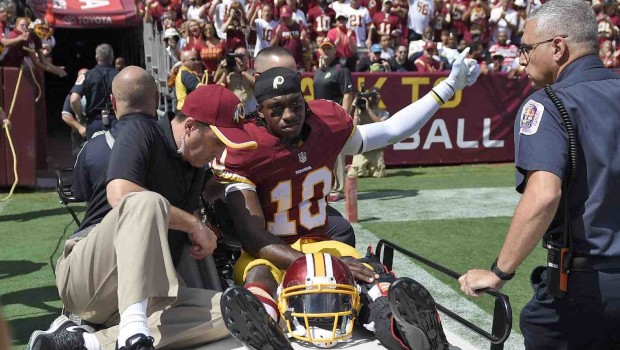 Jackson suffered a shoulder injury and Griffin (photo above) dislocated his ankle.

What Eagles and Redskins fans have looked forward to for five months — the return of DeSean Jackson to play against the Eagles — now looks like a long shot at best.

The moment Jackson signed with the Redskins in April, the team’s trip to Philly on Sept. 21 instantly became one of the season’s most anticipated games.

Now, it’s unclear if Jackson will be able suit up next Sunday at Lincoln Financial Field.

And it is certain that starting quarterback Robert Griffin III will not be under center against the Birds, since he dislocated his ankle in yesterday’s game.

Jackson suffered a sprained AC joint in his left shoulder in the first quarter of the Redskins’ 41-10 victory over the Jaguars on Sunday. Jackson was attempting to make a catch when he fell on his left side and Jacksonville safety Josh Evans landed on top of him.

“I feel a little better from when it first happened,” Jackson said after the game. “The player actually just fell right on my shoulder.”

It’s the same injury Jackson suffered as a member of the Eagles.

“I’ve had it before, an AC sprain,” Jackson said. “This one was a little vicious [with] the pain right on the bone. I’m day-to-day and hopefully I can get back for practice next week. Big week next week vs. Philadelphia. I’m just looking forward to getting treated and doing the things I need to do every day.”

Jackson, of course, was unceremoniously released after a career year in Philly last season. Signing in Washington guaranteed him two opportunities to get back at his former team.

“It’s still early,” Jackson said, referring to his chances of suiting up. “Where I feel now, the pain has eased up a little bit. I look forward to coming back next week and playing.”

If Jackson is unable to play, his next shot at the Eagles would be Dec. 20 at FedEx Field.

“Regardless of whoever we’re playing, I’m going to do my best to get out there and play,” he said. “It’s still early. I need to figure [things] out. Being Sunday, you have a full week to look at it. It feels a little better. I’m not really in that much pain anymore. Hopefully it will just get better every day.”