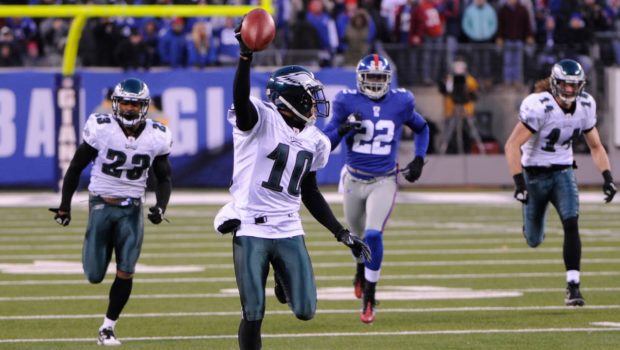 RETURNING EAGLE DESEAN JACKSON WILL HAVE A SPECIAL ROLE!

The Eagles surely traded to bring back wideout DeSean Jackson for his ability to go deep and catch Carson Wentz bombs.

But they also have their return game in mind.

Jackson returned four punts for touchdowns over the first six years of his NFL career, but a role in the return game didn’t remain part of his portfolio when he left the Eagles before the 2014 season.

Jackson returned eight punts during stints with Washington and Tampa over the last five seasons, so it has been a while since special teams work was a regular gig. It sounds like that will change now that Jackson is back in Philadelphia.

It doesn’t sound like Jackson will be back for every kick, but special teams coach Dave Fipp suggested Jackson will get his chances.

“I would say it this way: I’m sure he’ll have a role,” Fipp said yesterday. “Exactly what that is, I don’t know if anyone knows that totally yet.”

Fipp acknowledged that there are “a lot of variables” that will go into exactly how much Jackson will be used as a returner, but it sounds like he’ll be returning to more than Philly this season.