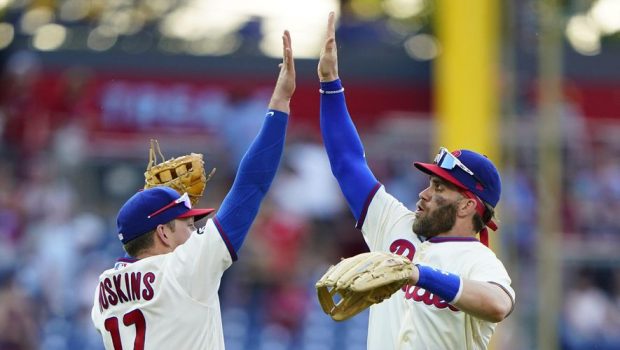 What a difference a returning superstar makes to the Phillies.

Bryce Harper hit a run-scoring single that stopped an 0-for-18 skid in his return from the injured list, Andrew McCutchen hit a three-run homer and the Phillies beat the Washington Nationals 5-2.

Harper was in right field and hit third after missing 11 games with a left wrist injury.

Harper was hurt on April 28 when a 97 mph fastball from St. Louis’ Genesis Cabrera hit him on the face and then the left wrist. He returned to the lineup after three days off but struggled.

“I’m ready to go,” he said. “When I step on the field, I try to bring passion into what I do every single day. I’m excited to get out there and grind with my guys.”

The Phillies were happy for his return, too.

“There’s a lot of different things he can do, and we’ve obviously missed that,” Girardi said. “And it’s great to have him back.”

Said McCutchen, “We all know what he can do. It’s good to have him back. It’s going to strengthen the lineup.”

Washington’s Josh Harrison was hit by pitches twice, by starter Spencer Howard and by Ranger Suárez (1-0), who won by pitching three hitless innings.

Rhys Hoskins had an RBI for the Phils, who won for just the second time in the last six games.

Josh Bell went deep for the Nationals. Washington’s run differential dropped to minus-25.

“We have to keep grinding,” manager Dave Martinez said. “Sometimes I feel like we’re really close to busting out of it. Today just wasn’t that day.”

With Washington ahead 1-0 in the fourth, Bell booted Jean Segura’s one-out grounder for an error. After Harper, Hoskins blooped an RBI single for a 12-game hitting streak and McCutchen hit an 84 mph slider to left for his 10th homer.

Bell homered against José Alvarado leading off the eighth. The Nationals put two on with no outs, but Alex Avila lined out, Victor Robles flied and, pinch-hitter Ryan Zimmerman struck out.

“We had the right matchups; it just didn’t happen,” Martinez said.

Harper singled off Sam Clay in the eighth.

Washington scored in the third when Juan Soto’s grounder that went through Segura’s legs at second base and allowed Trea Turner to score from third,

Howard allowed an unearned run and one hit in 2 1/3 innings.