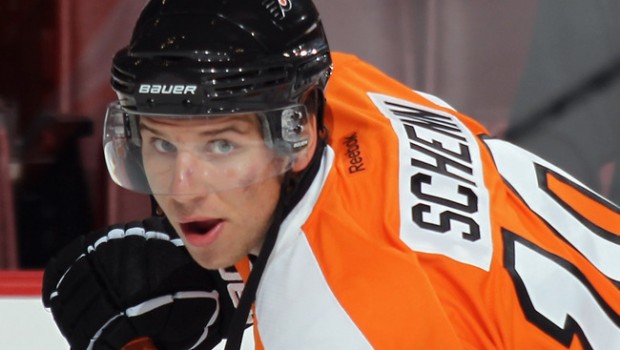 The Flyers hope 24-year-old forward Brayden Schenn is poised for a breakout season.

How they finished: Did not make the playoffs

The cast around them, however, is much more of a question mark. The Flyers need to find a left wing for Giroux-Vorachek. Michael Raffl was their usual linemate last season, but ultimately he is not the best fit.

While Giroux and Vorachek are undeniably the two best players on the team, neither one of them led the Flyers in goals last season. That honor fell to Wayne Simmonds who notched 28. That’s because Giroux and Vorachek thrive on setting up the players around them. They would benefit the most by having a sniper on their wing, a goal-scorer capable of finishing off plays created by Giroux and Vorachek. Raffl was passable, but with 28 points last season, he doesn’t exactly fit the bill.

A more likely candidate is Brayden Schenn, a 24-year-old forward that the Flyers hope is poised for a breakout season. He will certainly spend some time this season on the top line. Throw in Simmonds and Sean Couturier to round out the second line and you’ve got a pretty good top six.

The bottom six, however, remains a question mark. The Flyers have to find a way to coax more out of Vincent Lecavalier and they may have better luck without former head coach Craig Berube calling the shots. The two did not see eye to eye with one another. If they can somehow manage to resurrect Sam Gagner’s career as well, that would certainly help.

Fast-forward two or three years and this defense is set with all the great talent they have in the pipeline (Ivan Provorov, Travis Sanheim, Shayne Gostisbehere). Until then, the blue line will remain a problem largely because of lack of depth.

Mark Streit is great, but is almost 38 and Andrew MacDonald and Michael Del Zotto are both inconsistent. The addition of Yevgeni Medvedev is intriguing, but remains a gamble. He is 33 and has never played an NHL game, but the Flyers will fork over $3 million to him this season. You don’t give away that kind of money to a 33-year-old unless you are expecting a significant impact.

One bright spot, however, is that the issue in net appears to be solved. Steve Mason emerged last year as the clear No. 1 with a 2.25 GAA and .928 save percentage. With the addition of Michal Neuvirth, there is a clear hierarchy in net. There will be no tandem this year.

The biggest wild card of all for the Flyers is not on the ice at all, but behind the bench. General manager Ron Hextall hired Dave Hakstol in the offseason as the new coach to replace Berube. Hakstol, 47, has no NHL head coaching experience and spent the last 11 seasons coaching the University of North Dakota. He is the first coach to go directly from college to the NHL since 1982.

Hakstol may have been very successful in the college ranks and has said all the right things thus far, but at best he remains a question mark. This is a huge gamble for the Flyers that could either payoff or blow up in their faces.

Here is everything the Flyers need to go right for them this season: Schenn needs to breakout as a top-line caliber forward, the third and fourth lines need to produce, Streit needs to delay the aging process for another year, MacDonald and Del Zotto have to play better, Medvedev needs to transition seamlessly from the KHL to the NHL, Mason needs to show last season wasn’t a fluke and Hakstol needs to establish himself as an NHL coach.

That’s a lot of question marks.

I think they are a year or two away from seeing the payoff. They still could be a dark horse to reach the postseason, but more likely they are one of the last teams eliminated from contention at the end of the regular season.