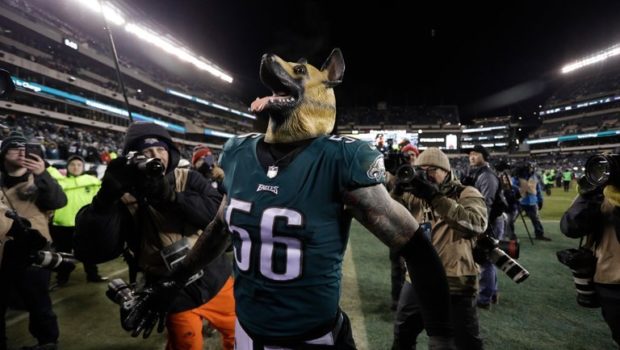 RETIRING EAGLE CHRIS LONG A WEED MAN FROM WAY BACK!

The NFL and NFL Players Association are taking steps to improve players’ pain management and maintaining positive mental health, opening the door to formally allowing players to use marijuana and cannabinoids for pain.

And retiring Eagles pass rusher Chris Long is a poster child for its benefits.

Long called into the “Dan Patrick Show” to talk weed.

“We should be headed to a place where we allow players to enjoy what I would not even call a drug – it’s far less dangerous than guzzling a fifth of alcohol and going out after a game,” Long said. “Chances are the player won’t even make it to the club [laughs] to do this sort of thing that we all kind of wag our finger at when we hear about a guy getting in a fight or getting a DUI, you’re never going to read about him sitting on the couch and binge-watching ‘Game of Thrones’ again.

Long admitted that he has been a marijuana user.

“I’m not a dry snitch, I’m not going to put a percentage on how much the league smokes, but I certainly enjoyed my fair share on a regular basis throughout my career,” he said. “So, you know, and I was never afraid to say that and I’m able to say it more explicitly now: if not for that, I’m not as capable of coping with the stressors of day-to-day NFL life. A lot of guys get a lot of pain management out of it. Toradol did more pain management for me.”

Toradol, which is the brand name for the drug ketorolac, is a non-steroidal anti-inflammatory that is not a narcotic and isn’t habit-forming, though it can have other side effects.

“On the weekend you’re going to have a few more drinks, and a few turns into a few too many… It’s just not the same. If you’re serious about players not smoking, you’d be testing more often. I hope they go the opposite direction and kind of realize how arbitrary doing that one test a year is.”