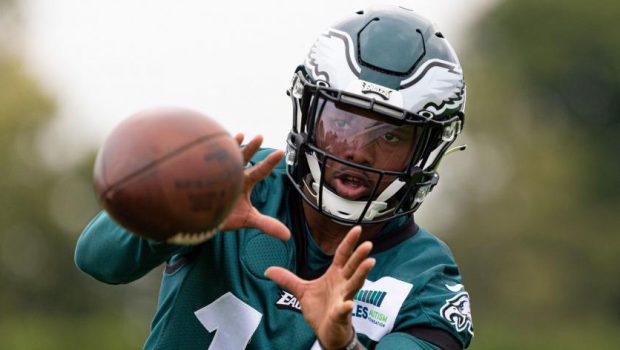 NATIONAL MEDIA DUMPS ON EAGLES — BUT SI.COM IS THE EXCEPTION!

Most of the national media are on the Eagles Suck bandwagon.

They haven’t seen any of training camp or the exos.

So they can’t appreciate Javon Hargrave or Josh Sweat or how good DeVonta Smith really is.

But SI.com’s ANDREW BRANDT is a contrarian:

The Eagles will be better than you think

I’m not quite sure why the Eagles are predicted to be one of the worst teams in the NFL this season.

Yes, they played poorly last year and finished last in the weakest division in the league.

But they have removed a big part of the reason they were unsuccessful last season: the starting quarterback.

Carson Wentz has left the premises, albeit with disastrous cap consequences.

And the Eagles move forward with an ascending quarterback in Jalen Hurts and their continued strengths—the offensive and (especially) defensive lines—along with more explosive firepower at the skill positions.

And if they are not much better, they’ll simply trade their multiple first-round picks next year for Deshaun Watson or Aaron Rodgers. I’m kidding … maybe.