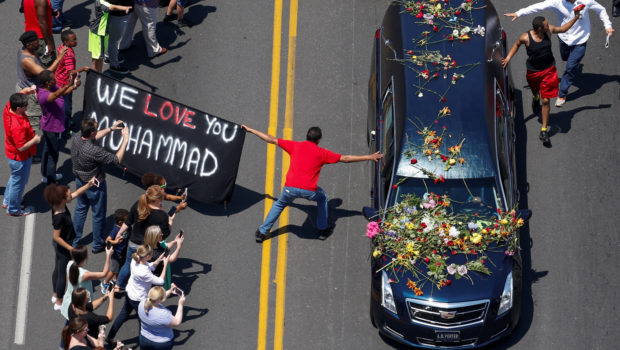 The mountain came to Muhammad yesterday in Louisville.

In a spectacle that fanned across miles of his hometown, in memories that stretched over some of 20th-century America’s most turbulent years, and in prayers from the palette of faiths that he honored as paths to truth, Muhammad Ali was laid to rest, one week after his death at age 74.

Ali was eulogized in a grand sports arena by, among others, a priest and an imam, a rabbi and a monk, a former United States president and a famous comedian. Protégées and daughters and his wife remembered him. As they spoke, all stood beneath the flags of the United States and the Olympic Games, symbols of a man who saw himself as a citizen of America and of the world.

Earlier in the day, his coffin traveled through nearly 20 miles of Louisville (above) cheered and saluted by tens of thousands of people who tossed flowers onto the hearse and chanted his name. On Thursday, a traditional Muslim ceremony was held.

It was all part of a leave-taking that Ali had seen as a chance to lead once more by including Christians, Jews, Buddhists and Native Americans as speakers in an emphatic, if not explicitly spoken, renunciation of sectarianism and embrace of ecumenism.

“Muhammad indicated that when the end came for him, he wanted to use his life and his death as a teaching moment,” Ali’s widow, Lonnie, said. He was 12 years old when his bicycle was stolen, she noted, and a police officer encouraged him to learn boxing. Teachers believed in him. Friends backed his career.

Named the athlete of the 20th century by Sports Illustrated, Ali never settled for sportsman as his sole identity. Among the first speakers at the memorial was the Rev. Kevin Cosby of St. Stephen Church in Louisville, who said Ali had taken his place in history by rejecting the narrative of a country that had, from its earliest days, refused to recognize African-Americans as fully human and full citizens. That mattered because of the times he lived in, Dr. Cosby said, the context that helped define him just as the American Revolution had for George Washington and the Great Depression for Franklin D. Roosevelt.

President Obama, in Washington for his daughter’s high school graduation, sent a letter that said Ali’s example had inspired him to think how far he might one day go himself.

“Ali was a radical, even in the most radical of times,” Mr. Obama wrote, in a letter read by his senior adviser Valerie Jarrett. “A loud, and proud, and unabashedly black voice in a Jim Crow world. His jabs knocked some sense into us, pushing us to expand our imagination.”

Billy Crystal, a young and struggling comedian when he became friends with Ali, said the boxer had invited him to go for a training run one morning at a country club. Mr. Crystal said he explained that the club excluded Jews. Ali, he said, was incensed to learn this, saying, “I’m a black Muslim, and they let me run.”

Ali never ran at that club again, Mr. Crystal said. He remembered, as well, that the silver-tongued Ali had lost his speech to illness in recent years, but that he continued to be a powerful force on humanitarian missions.

“Ultimately, he became a silent messenger for peace, who taught us that life is best when you build bridges between people, not walls,” Mr. Crystal said.

Drafted to serve in the Vietnam War, Ali said his faith could not countenance a combat role, and Ms. Ali noted that he refused to leave the country even though his stance cost him his boxing title and put him in jeopardy of prison. Mr. Crystal said Ali had set an example.

“There were millions of young men my age, eligible for the draft for a war we didn’t believe in,” Mr. Crystal said. “It was Ali who stood up for us by standing up for himself.”

Viewed through the lens of history, Ali’s stance on the Vietnam War is now widely seen as principled; at the time, he was denounced. Dr. Cosby noted that at the Kentucky Derby, gamblers cannot bet on a horse once it has reached the winner’s circle.

“There were a lot of people who would bet on Muhammad Ali when he was in the winner’s circle,” Dr. Crosby said. “But the masses bet on him while he was still in the mud.”

Close to 20,000 people were in the KFC Yum Center arena for the memorial, which lasted more than three hours, with 13 speakers in addition to members of the clergy who prayed and chanted.

If the spectacle in the arena was global, the scenes on the roughly 19-mile procession were strictly local, pulsing with pride for a native son. Ali’s ties to the compact, quirky city of his youth never frayed. All business halted as workers streamed to the sidewalk to stand vigil in gently chaotic decorum.

“It’s almost like we’re extended cousins,” Andrea Meriwether, 31, a native of Louisville, who was taught pool by Ali’s younger brother, Rahman Ali, told the New York Times. “I can’t think of anyone from here who hasn’t met him or had some connection.”