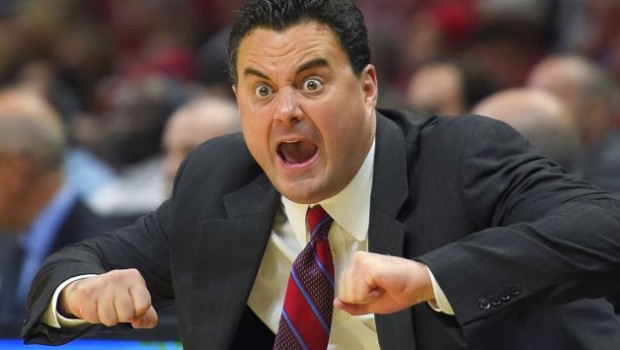 REPEAT AFTER ME — WISCONSIN CAN BEAT KENTUCKY IN FINAL FOUR!

Wisconsin coach Bo Ryan has come a long way from the Philly suburb of Chester, where he learned basketball at the knee of his dad Butch.

Yesterday, his journey took him to the Staples Center in L. A. where his Badgers knocked off Arizona 85-78 to earn their second straight trip to the Final Four.

For the second year in a row, Wisconsin had beaten Arizona in the West Regional final to advance to the Final Four. Frank Kaminsky left), Wisconsin’s 7-foot center, scored 29 points, and Wisconsin made six of its first seven 3-pointers in the second half, helping turn a 3-point halftime deficit into a 9-point lead with 10 minutes 48 seconds remaining.

Arizona chased the lead the rest of the way but never caught it. Wisconsin shot 78.9 percent from the field in the second half, including 10 of 12 from beyond the 3-point line. None were better or braver than Wisconsin’s silky 6-foot-9 forward, Sam Dekker, who had 27 points, including a 3-pointer with 1:51 remaining and another with 17 seconds left, to seal the victory. “Let’s go get a title,” Dekker (left) told Kaminsky as they embraced at game’s end.

It was the same result, but with a different method, as a year ago in nearby Anaheim, Calif., when Wisconsin was seeded second in the West and Arizona was first.

Wisconsin won that game in overtime, 64-63, led by 28 points from Kaminsky.

With the seedings reversed, and with most of the key players returning, the game was considered a relative rematch and a chance for Arizona (34-4) to make amends.

Instead, history repeated, ending Arizona’s season short of an aspired-for national title and sending Wisconsin in search of its first national championship since 1941.

Despite an enthusiastic crowd weighted in Arizona’s favor, Wisconsin bolted to a 10-2 lead as Arizona missed seven of its first eight shots. Forward Brandon Ashley, Arizona’s second-leading scorer, committed two fouls in the first 81 seconds and was pulled to the bench.

But Wildcat coach Sean Miller gambled by putting Ashley back in midway through the half, and Ashley, working mostly against Kaminsky, scored 6 straight points for the Wildcats to tie the score at 14-14 with 9:04 left in the half. Ashley and Rondae Hollis-Jefferson led Arizona with 17 points apiece.

The pace quickened and emotions heightened as the teams traded baskets. Momentum never lingered. The teams arrived with top-five rankings and national championship hopes, and the performances matched the hyped expectations.

The biggest roar came when Arizona’s Gabe York drained a 3-pointer, in transition, from the left corner, giving the Wildcats their first lead, at 25-24, with 3:15 left in the half.

They nudged the lead to 33-30 at halftime, and it became obvious that if Wisconsin was to repeat last year’s result, Kaminsky would havr to step up his game.

He opened the second half by making a 3-pointer to tie the score at 33-33, starting the Badgers on an 11-1 run that gave them a loose grip on the game. Dekker’s 3-pointer moments later gave Wisconsin a 36-34 lead, and the Badgers never trailed again.

Arizona, one of the best defensive teams in the country, allowed a season-high 85 points.

“My God, there were so many 3s going in, it almost took the bite out of the loss somewhat,” Miller said.

While Arizona returned most of its lineup from last year’s game, Wisconsin featured players who accounted for 59 of the 64 points, none more vital than Kaminsky.

Last year against Arizona, Kaminsky had 28 points, including 20 in the second half and overtime, to lift Wisconsin to its 1-point victory. That performance lifted Kaminsky into prominence, and he spent this season surrounded by national-player-of-the-year discussions, averaging 18.4 points and 8.1 rebounds for one of the country’s best teams.

This time, it was Dekker who had 20 points after halftime, making baskets perfectly timed to stop Arizona surges. As his final, high-arcing shot floated from the right wing in front of Wisconsin’s bench, his teammate Traevon Jackson yelled, “Buckets!” By then, Dekker was walking coolly up the court, smug as a man without a worry.

“I was confident it went down,” Dekker said.

Other Badgers contributed offensively in pieces, but none scored more than 10 points.

For Arizona, the loss was another bitter end to an otherwise successful season. It was Miller’s fourth attempt to reach the Final Four after coaching teams to the round of 8 — his third with Arizona, after a trip with Xavier in 2008.

The previous attempts ended in defeats that cumulatively added up to a backhanded compliment for Miller, still only 46, as the best coach never to reach the Final Four.

“You lose four times in seven years, that’s probably a record, right?” Miller said, after the senior point guard T. J. McConnell apologized for not having gotten his coach to the Final Four.

Miller said that he understood that “people will jump all over us for losing in the Elite Eight,” but he defended his players, including McConnell, who won 69 games in the past two years.

A year ago, Ryan was in the position Miller is, until Wisconsin slipped past Arizona to reach the Final Four. Players in the Wisconsin locker room said they were happy to make it again, but the outlook is different this time.

“They’re not totally satisfied,” Ryan said of his players. “They feel there is more out there.”