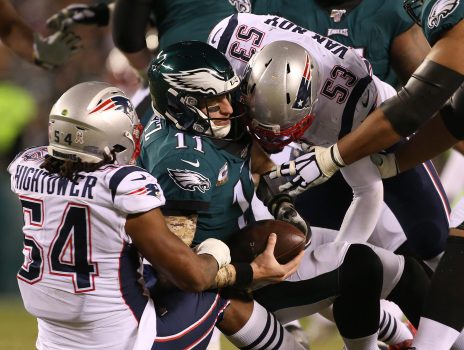 REPEAT AFTER ME: EAGLES CAN WIN NFC EAST, BUT HISTORY SAYS NO!

The NFC East is as predictable as the sun coming up in the east.

There hasn’t been a repeat division champ since the Birds dominated from 2001 through 2004 — the division crown having since gone back and forth between them and the Dallas Cowboys with the New York Giants and Washington Football Team peeking their head in once or twice. And so it goes, with the Eagles having won the East in 2019, it feels like the Cowboys are primed to take it back from them yet again in 2020 — seeing as they have fewer question marks at key positions than their rivals in Eastern PA.

Doug Pederson and general manager Howie Roseman took a ton of flak following the NFL Draft, wherein they refused to trade up a bit to land CeeDee Lamb (which was the win-win of fixing a top need while also keeping him out of Dallas) and instead stood pat to select Jalen Reagor. This isn’t to say Reagor isn’t talented, because he is, but Lamb is a readymade WR1, whereas many view Reagor as a slot guy who’ll now be asked to be much more, and quickly. Yes, there are rumors Alshon Jeffery is refocused, but there are also still reports the Eagles are willing to trade him after having battled through a mercurial last several months of him.

The addition of Darius Slay will do wonders for helping a porous secondary and the already impressive defensive front is that much more so with an addition like Javon Hargrave, but when Carson Wentz — who still needs to prove he can stay healthy — takes the field, will he have the weaponry (outside of Zach Ertz and Dallas Goedert) to stave off a potent Cowboys team that also now includes Lamb? And if he can’t stay healthy, could Jalen Hurts instantly locate some Foles Magic in Year 1 and with limited or no first-team work prior? Both logic and the recent history within the division suggests the answer is no, especially considering the Slay-led defense still has question marks at safety as well.