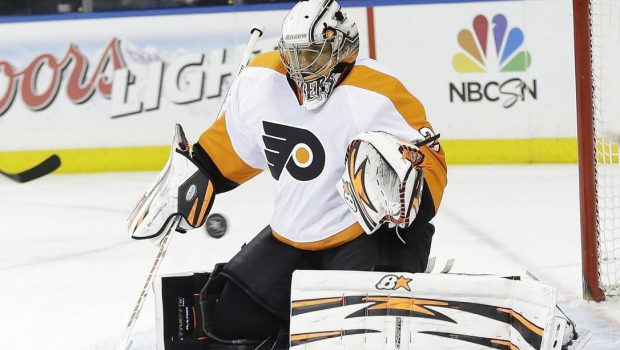 It was in the latter days of his NHL career that one of his teammates made the horrible mistake of hovering around his crease during a drill. Trying to screen the goalie and create a little mayhem. “He didn’t like it,” says Zac Rinaldo of his former Flyers brother Ray Emery.

Anyone who watched Emery’s career in the minors and later in the big league knows that he was a first-rate goalie — in 326 NHL games he posted a 2.70 goals against average.

And also an intimidating goalie.

Yet, the people who knew him as more than a guy wearing an Ottawa Senators, Flyers, Anaheim Ducks or Chicago Blackhawks sweater on their TV say that wasn’t really who he was. Not in real life. Certainly not in recent years. In conversations about him, they sprinkle in words like “humble,” “happy,” “approachable” and “a beautiful person.”

In fact, the 35-year-old Hamiltonian (by way of Cayuga), who drowned yesterday in Hamilton Harbour, died just hours after playing in Rinaldo’s charity hockey game that was raising money for hungry kids in this city.

It was 27 years ago that Hulsman first met him. An 8-year-old Emery and his folks wandered into Kenesky’s — Hulsman owned and operated the historic sporting goods store — to get some equipment fitted. The two became good enough friends that Emery eventually started going to Kenesky hockey camp, teaching there and eventually living at Hulsman’s place in Ancaster for three summers.

When the goalie won a championship with the Chicago Blackhawks, he spent a big part of his one day with the Stanley Cup at the store signing autographs and posing for pictures. When he heard Emery had remembered his roots and would be bringing the Cup, Hulsman cried.

“You wouldn’t want a better wingman,” he says.

There are more tales. Legendary martial arts coach Rick Joslin remembers Emery and teammate Brian McGrattan coming to the Concession Street gym to train. Yes, they were working on honing their fighting skills, but Joslin says the goalie was more intrigued with using the speed bag to work on his already amazing reflexes to stop more pucks.

“He was real, real humble,” he says. “Just loved him. A beautiful person.”

Players and executives throughout the hockey world who crossed paths with the man called Razer offered similar sentiments as they talked about him in glowing terms to various media outlets on Sunday. Flyers captain Claude Giroux, Maple Leafs GM Kyle Dubas, James van Riemsdyk, Ottawa owner Eugene Melnyk, Dylan Strome, Edmonton’s Milan Lucic, Toronto’s William Nylander, Flyers president Paul Holmgren and many more all spoke of his competitive fire and how good a teammate he was.

Yes, there were demons. As a younger man, he did have a temper that could explode in a moment. There was an alleged road rage incident with an elderly Ottawa man. Years ago while playing for the Senators there were rumours and reports of excessive partying.

“I really don’t want to go into details,” he told ESPN in 2008. “I’m not a saint and I’m not in jail, either. I think I’ve learned a lot of lessons. I didn’t feel comfortable. I got myself into some bad ways. It took some time to clear my head.”

But he also told the magazine he’d been getting help with his issues. Which brings us to the more recent Ray Emery, about whom the people around him spoke in glowing terms.

Ancaster business person Joe Saputo has known him for well over a decade. While he says he’s always been close with Emery and always liked him, he says there was clearly a change in the man from the day they met until now. He says his ego disappeared, his flashy lifestyle was set aside in favour of humility, and when people would approach him, he would go out of his way to show his interest in them rather than them in him.

The controversial guy people saw on the ice and in the headlines was no more. The Emery of today, he says — the man who played with him at a charity golf tournament last week — was always laid back, always smiling, always first to pay for everything and always nice with everyone.

“I do know the guy he was and the guy he is today are totally different,” Saputo says.

Listen to enough stories from people, though, and they’ll tell you that part of him was always there. It may have been hidden beneath some loud tales or obscured by some wild scenes on the ice but it was there.

Take that story Rinaldo tells, for example. That day in practice when they almost came to blows. What ended up happening?

“We laughed about it and shook hands.”