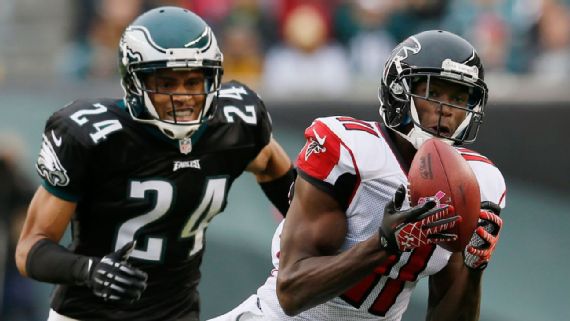 Eagles fans will remember the 2011 season with awe and wonder (preseason) and severe disappointment (during the season).

It was when big boss Joe Banner and coach Andy Reid tried to save their jobs with a huge bet in free agency:

That turned into a nightmare.

The biggest of whom was Nnamdi Asomugha, signed as a free agent after years as a Pro Bowl cornerback in Oakland.

He was woeful and so were the Birds.

They went 8-8 and the next season Banner and Reid would be fired.

Nnamdi couldn’t cover me and he couldn’t tackle you — and he would be gone when Chip Kelly was hired in 2013.

Now he is a film-maker, and his “Crown Heights” opens nationwide on Friday.

Bleacher Report did a massively long profile on him, during which he reflects on his time in Philly:

Talking about Philadelphia remains a soft spot for Asomugha. Sitting at a table outside the National Aquarium in Baltimore after lunch, he ponders the questions about his time with the Eagles. As the breeze from the Patapsco River helps cool a humid summer day in the DMV, the constant grin that occupies Asomugha’s face turns expressionless as he stares blankly ahead, not making eye contact. He speaks slower, often pausing for four, five seconds mid-sentence. He needs to choose all of the right words. He doesn’t want to make any excuses about that period of his career, he later says.

He felt rushed going into that offseason. The lockout changed things. He couldn’t prepare for the biggest decision of his life. As the NFL and the Players Association negotiated the next collective bargaining agreement, Asomugha rehabbed an ankle injury, unable to talk to anyone from Oakland or any prospective employers. When the lockout finally ended, Asomugha needed to choose a new team in 18 hours without any visits. Maybe, he says, he makes a different decision if there wasn’t a lockout. It’s a moot point, though. Asomugha doesn’t want to play the what-if game.

“It wasn’t like I could spend much time talking about defenses and schemes,” Asomugha says. “It was ‘pick the team, the head coach and make a decision.’ And that’s what we did.”

He chose Andy Reid and Philadelphia, signing a five-year, $60 million contract. He loved Reid, who he still texts to this day, and was excited to move from one passionate fanbase to another. Everyone else took note of the dollar sign, including his teammates. The day the players received their first paychecks after Asomugha received his new contract, the Eagles locker room crowded around their newly minted free-agency jewel, hoping to get a glimpse of the number on the check. All right, Nnamdi. Let’s see yours. Let’s see yours, Eagles players yelled. “It was on everyone’s mind,” Babin says.

Asomugha willingly took on the weight from teammates and fans alike that came with the big-ticket contract. “He had broad shoulders and he took it,” Babin says. “He took the approach of, ‘I get it. I’m the guy. I’m the leader of the team.’ He had the big price tag. He knew what he had to do.”

The entire offseason felt rushed after the lockout. As training camp started, things didn’t jell as personalities clashed in the locker room. “The Dream Team,” a sobriquet coined by Vince Young, started the season 1-4 and finished 8-8, missing the playoffs.

“We all just came in trying to learn and trying to pick it up as quickly as possible,” Asomugha says. “It was never a feeling of ‘I’ve been here before. We’ve done this before. I can come in with the same confidence that I had before.’”

The defense finished eighth overall, but as the big-ticket free agent, Asomugha took most of the blame for the team’s struggles. The second year didn’t go any better, as the Eagles finished 4-12. In his two years with the Eagles, Asomugha allowed nine touchdowns in 32 games after allowing just one score in 45 games for Oakland from 2008-10, according to Pro Football Focus. Then came the report from former Eagles defensive tackle Hollis Thomas, who said Asomugha regularly ate lunch by himself in his car, the 1997 Nissan Maxima that he’s had since high school. Asomugha says it wasn’t an unusual thing to do.

It was too late, though, for Asomugha. And the more he struggled, the more he became the scapegoat for the team’s failures.

“I have no idea where that information came from, but it seemed written to frame his approach and his actions as a separatist or trying to put himself away from everyone else,” Babin says. “We in the locker room all knew the reality of it.” According to Babin, Asomugha’s teammates knew that he was reserved—that he was the kind of guy who enjoyed time collecting his thoughts, reading and listening to music by himself, and they didn’t take issue with it.

The Eagles and new head coach Chip Kelly released Asomugha in March 2013. He signed a one-year deal with the San Francisco 49ers, appearing in three games before being released in November. Asomugha’s narrative as a coveted corner, whom QBs feared, changed. He was now the “worst free-agent signing in NFL history,” according to many fans and talking heads. Asomugha announced his retirement in December 2013, when he began to ponder advice from Hall of Famer Ronnie Lott. “Once you finish, take some time and focus on one thing,” Lott said. “Go after the same thing you want in football.”