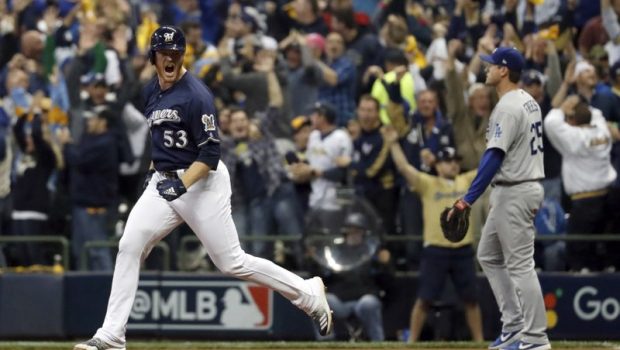 Woodruff, of all people, had the momentum-swinging hit.

“It’s something obviously coming into the day, you don’t know in your wildest dreams that’s going to happen,” he said.

It was the first time in postseason history that a pitcher homered in a lefty vs. lefty matchup. Woodruff was understandably was pumped as he rounded the bases.

“He was fired up when he came home. He nearly broke my arm,” Cain said.

The Dodgers scored three times in the eighth to make it 6-4, then nearly tied it in the ninth. Chris Taylor hit an RBI triple off Cain’s glove in deep center field with two outs before Corey Knebel fanned Justin Turner to end it.

Game 2 is today at Miller Park, with Wade Miley pitching for the Brewers against Hyun-Jin Ryu.

The Dodgers did some damage against the Brewers’ bullpen. Milwaukee used seven pitchers, including three scoreless innings from Hader. Woodruff threw two perfect innings and got the win.

“But for us to get a look at these guys out of the ’pen in a seven-game series, I think that’s a good thing,” manager Dave Roberts said.