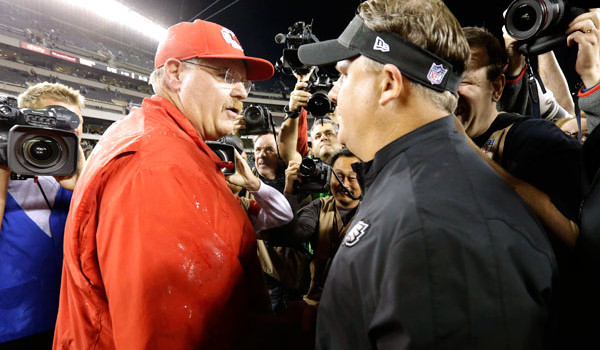 WHAT A RELIEF! REID APPROVES OF EAGLES’ FRONT OFFICE SHAKE-UP

If you are like me, the jury was out on the Eagles’ front office shake-up until someone with impeccable judgment, a demonstrated ability to elevate folks who deserve it and …

Sorry, we’ll have to settle for Andy Reid, the former Eagles coach whose judgment was so impaired that he elevated an offensive coach to defensive coordinator.

I am resting easier about Howie Boy Roseman’s demotion and the elevation of Chip Kelly to Supreme Leader now that I know Big Red approves too!

The Chiefs’ third-year head coach showered praise on vice president of player personnel Ed Marynowitz, whom coach Chip Kelly recently promoted to the highest-level talent evaluator in the building under the head coach.

“It’s great to have Ed in a position where Chip has that trust in him,” Reid said. “Ed’s on the rise. Boy, he’s a good one and I think it was a great choice by Chip.”

A slimmer Reid spoke to reporters from the podium at Lucas Oil Stadium, host of the annual NFL Scouting Combine.

Nobody from the Eagles is scheduled to take the podium this week. Ironically, Reid rarely did press conferences at the combine during his longtime stint as Eagles coach.

Marynowitz left a high-profile job working alongside Nick Saban at the University of Alabama to join the Eagles’ scouting staff in 2012, which ended up being Reid’s last season after the team went 4-12.

In their one year together, Reid observed Marynowitz’s eye for football talent and potential as an executive.

“I think he’s a good, young kid that’s on the rise,” Reid said. “He works hard, good evaluator, wants to be good. All the intangible stuff. Remember, at Alabama now they had full trust in him. Nick didn’t want to lose him.”

Reid doesn’t think the Kelly-Marynowitz dynamic will follow the same road as the Kelly-Roseman partnering.

“This isn’t warfare,” he said. “You work together. Chip is great at that. Ed’s great at that. So I don’t think that will be a problem. They’ll communicate. This is not going to be a boxing match.”