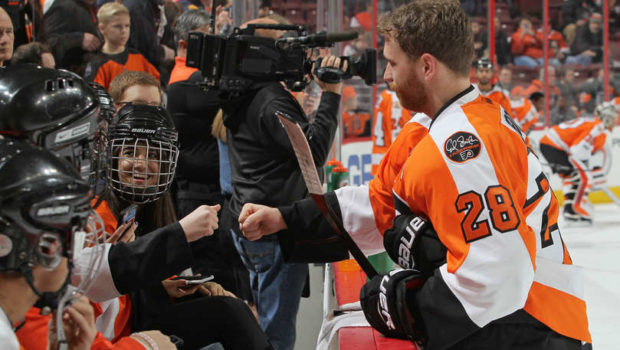 WHAT A RELIEF! NEUVIRTH AND GIROUX GIVE FLYERS 5-4 OT WIN!

The Flyers went to the bullpen and got a win!

Michal Neuvirth made 14 saves in relief when the Flyers defeated the Vancouver Canucks 5-4 in a shootout last night at the Wells.

Neuvirth entered the game to start the third period in place of Steve Mason, who allowed four goals on 24 shots through two periods. Neuvirth stopped all three shootout attempts by the Canucks, including a save on Loui Eriksson to clinch the victory.

Claude Giroux, who turned 29 yesterday, was the second shooter for the Flyers and put a wrist shot past Canucks goaltender Ryan Miller for the only goal of the shootout.

The Flyers were outshot 38-35, were behind three times, and spent a season-high 14:28 in the penalty box, including 8:37 in the first period.

“That was ugly wasn’t it?” forward Brayden Schenn said. “Probably not the way we wanted to draw it up, but at the end of the day we got the two points.”

Sean Couturier had a goal and an assist for Philly (22-16-6), and Schenn, Travis Konecny and Pierre-Edouard Bellemare scored.

Markus Granlund scored two goals, Brandon Sutter had a goal and an assist, and Daniel Sedin scored for Vancouver (20-19-5). Miller made 31 saves.

Henrik Sedin had an assist to give him 997 NHL points, three shy of becoming the first Canucks player, and 85th in the NHL, to reach 1,000.

The Canucks lost their third straight on the road (0-1-2).

“We haven’t been scoring an awful lot, so when you get four, you’d like a win,” Vancouver coach Willie Desjardins said. “But we got a point.”

The Canucks had chances early on the power play, including 7:10 with the extra man early in the first period when the Flyers were assessed back-to-back high-sticking double-minors. Daniel Sedin scored a 5-on-3 goal at 9:21 of the first for 1-0 lead but that was all they could manage.

“It was good we scored on the 5-on-3,” Desjardins said. “I thought we had some looks. I thought we had good puck movement. But saying that, it would have been nice to get one more on that.”

Granlund’s first goal gave the Canucks a 2-1 lead at 1:51 of the second, but the Flyers tied the game with goals 18 seconds apart by Bellemare and Couturier to go ahead 3-2.

That lead lasted 22 seconds, until Granlund bulled his way to the net and banged a puck under Mason at 10:01 to make it 3-3.

Sutter tipped a centering pass from Jayson Megna past Mason at 12:46 of the second to give the Canucks a 4-3 lead.

Neuvirth was in goal to start the third and kept the game tied after Schenn scored 57 seconds into the period.

“I was confident coming into the game and I’ve been practicing well,” Neuvirth said. “Coach [Dave Hakstol] asked me to shut the door and that’s what I did.”