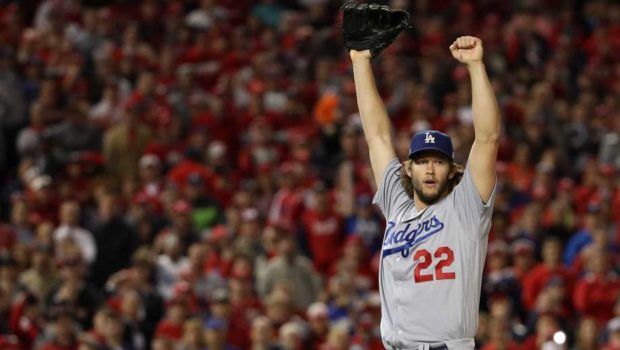 WHAT A RELIEF! DODGERS OUTLAST NATS 4-3, MEET CUBS IN NLCS

This was a playoff game for the ages!

The Los Angeles Dodgers ground down Washington Nationals’ ace Max Scherzer and their sturdiest bullpen arms during a four-run seventh inning last night and hung on for a 4-3 victory in Game 5 of the National League Division Series.

The 4 hour, 32-minute epic ended in unlikely fashion, with Game 4 starter Clayton Kershaw (above) recording the final two outs – the first against the unstoppable Daniel Murphy with the tying and winning runs on base. He got Murphy – 7 for 15 in the series to that point – on a pop fly to second and struck out Wilmer Difo to end it, sending a jubilant sea of blue tumbling over the visitor’s dugout atNationals Park in relief.

Kershaw’s two-out save on just one day of rest put an end to a series marked by marathon games and rampant momentum swings, not unlike a Dodgers season that seemed lost when their ace suffered a back injury in June.

“This kind of encapsules our entire season – where it takes 25 guys to win a game, and that’s what we did tonight,” manager Dave Roberts said amid showers of champagne in the visiting clubhouse at Nationals Park.

“This whole season, this team, man – , I’ve got so much love for all these guys,” said Dodgers closer Kenley Jansen, who fell just two outs shy of a three-inning save, throwing a career-high 51 pitches to carry his club from the seventh inning to Kershaw’s surprise finish.’

“We trust every one of each other. We talked about how this wasn’t going to be easy. To get to that goal, we just have to keep fighting.”

So now, the team with the biggest payroll among playoff teams will arrive in Chicago for the National League Championship Series as decided underdogs, both in talent and narrative.

The Chicago Cubs have already won 106 games this season, counting their four-game conquest of the San Francisco Giants in their NLDS, and with All-Stars or rising stars at every position, outflank any club still alive.

And with their exhaustively documented 108-year championship drought, the Cubs will command the moral support of any fan not already worn out by that storyline.

When it comes to angst, however, don’t sell the Dodgers short.

“Our fan base is as good, if not better, than any,” says Roberts. “Nineteen-eighty-eight is a long time. There’s a lot of things that have transpired this season. Just to bring a championship to the City of Los Angeles…”

That goal is still alive, thanks to one more all-hands effort in a season defined by that ethos.

Jansen, a free agent who could have been pitching his final game as a Dodger, was summoned in the seventh inning after lefty reliever Grant Dayton gave away all but one run of a 4-1 lead on a leadoff walk and pinch-hitter Chris Heisey’s two-run homer.

Jansen gutted through the seventh, eighth and into the ninth, throwring a season-high 51 pitches and recording seven of the nine outs Roberts requested.

Third baseman Justin Turner applied the first body blow to Nationals ace Scherzer, putting up a 14-pitch at-bat in the fourth inning to draw a walk. Scherzer made it through that inning with a no-hitter intact, but the likely NL Cy Young Award winner had thrown his final low-stress pitch of the ninth.

By the sixth, nursing a 1-0 lead, Scherzer was peppered for three singles, but escaped. Scherzer was at 98 pitches entering the seventh and Nationals manager Dusty Bakerhad a decision to make. He foreshadowed it hours before Game 5.

“You tend to stick longer with your aces than you would, you know, anybody else on your staff,” Baker said.

That mindset shifted the leverage of the game immediately.

Joc Pederson lined Scherzer’s first pitch of the seventh – and last one of the night – to the opposite field for a home run. It tied the game, and precipitated a 66-minute inning that saw both teams combine to deploy seven pitchers – the Nationals five.

All the maneuvering could not prevent Turner from leaving his final imprint on the series. He drilled a two-run triple to dead center field off Shawn Kelley, stretching the Dodger lead to 4-1 and providing the eventual winning margin.

The rest was on Jansen and Kershaw. Jansen yielded a hit and four walks – one an intentional pass to the unstoppable Murphy – and most notably struck out Jayson Werth on a full-count cutter and Anthony Rendon with the bases loaded to end that interminable seventh.

It was Kershaw, ultimately, who sent the Dodgers on to Chicago.