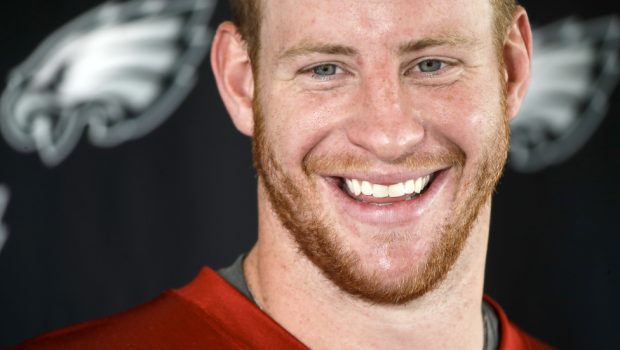 REHABBING EAGLES WENTZ HAS ADDED RUNNING TO HIS PASSING!

It’s been more than four months since Eagles quarterback Carson Wentz wrecked his knee against the Rams in the Coliseum.

So, his comments yesterday were anticipated by Eagles Nation. He offered an update on his recovery for the first time since the Eagles claimed the Lombardi Trophy by defeating the New England Patriots.

“We’ve started the running progression and all those things,” Wentz said at the NovaCare Complex. “I’m feeling good. I’m feeling good with where I’m at. I’m just trying to stay the course.”

While there is no definitive timetable for his return, the regular-season opener is “still the goal,” says Wentz. He added that he wouldn’t have to play in the preseason to be ready. Wentz missed the last three preseason games of his rookie season due to a rib injury before suiting up as the Week 1 starter in his rookie campaign of 2016.

“I can assure you that I’ll be smart about it,” he said.

Wentz took the league by storm in 2017 before injuring his knee. He was 11-2 in the games he started and set a franchise record with 33 touchdown passes. Wentz was named to the Pro Bowl, earned second-team All-Pro honors, and finished third in the MVP vote despite being sidelined for the final three regular-season games.

In addition to his passing prowess, Wentz’s ability to escape trouble and create big gains with his legs made him one of the most exciting players to witness. Wentz doesn’t expect the injury to limit his mobility.