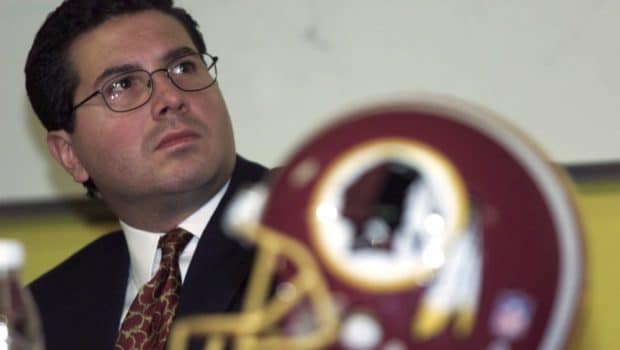 REDSKINS MINORITY OWNERS WANT OUT: ‘NOT HAPPY’ WITH SNYDER!

The Washington Redskins three minority owners want to sell their shares because they are “not happy being a partner” with owner Daniel Snyder, the Washington Post has reported.

Prominent businessmen Robert Rothman, Dwight Schar and Frederick W. Smith, who combined own about 40% of the team, have hired an investment banking firm to undergo a search for possible buyers, one of the sources told The Post.

The development comes as the team appears increasingly likely to change its name amid renewed pressure, given the national focus on human rights and social justice after the death of George Floyd in Minnesota.

Coach Ron Rivera told The Post on Saturday that he has been working with Snyder on a new team nickname in recent weeks. The team announced Friday that it will “undergo a thorough review” of the nickname.

One person who is familiar with the relationships between Snyder and the Redskins’ minority shareholders told ESPN’s John Keim that he felt this had to come as a big surprise to Snyder because he considered them all friends.