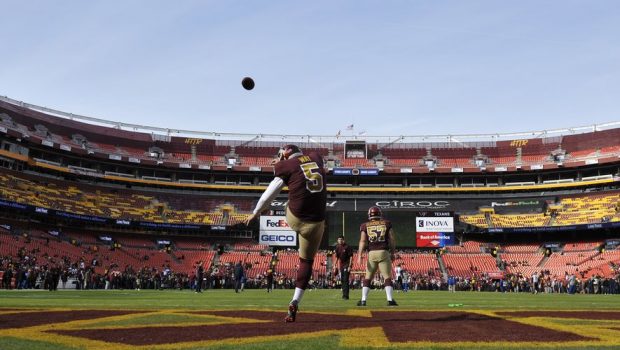 REDSKINS FANS BAILING OUT ON A SEVERELY SINKING SHIP!

Turn away. Make holiday wreaths, perhaps by knotting up your old Washington NFL jerseys, then twisting them into a burgundy-and-gold seasonal garland. Or maybe have one eggnog too many, so you can forget the score at the end of the third quarter Sunday at FedEx Field: New York Giants 40, Washington Redskins 0.

If you must, find some ancient footage online of a Washington team that was worth your time and attention. Watch Art Monk run his famous “dodge” route on third and nine, or just Google “Darrell Green catches Tony Dorsett from behind.”

But don’t watch the gruesome ­­mash-up of bad luck, bad play, bad coaching, bad owning and bad karma that has become this “Redskins” team that trailed the lousy, injured Giants 34-0 at halftime — the worst midway margin since the homely joint opened — on the way to a 40-16 loss to fall to 6-7.

“We pretty much got kicked in the jaw,” cornerback Josh Norman summarized of a team that now only has playoff chances in the purely mathematical sense.

Those who come to this team’s home finale in three weeks run the risk of seeing things they may wish they could forget. As Washington jogged off the field at halftime Sunday, thousands booed. Some fans, in the team’s own jerseys, saluted the Redskins, holding up just one finger and waving it at them.

“They had something to be upset about,” said Norman, who criticized the team’s fans earlier in the season for booing bad performances. “Respect that.”

“We came in at halftime and said, ‘It’s us against everyone,’ ” said right tackle Morgan Moses, who added that, as far as cheers, “we got family for that.”