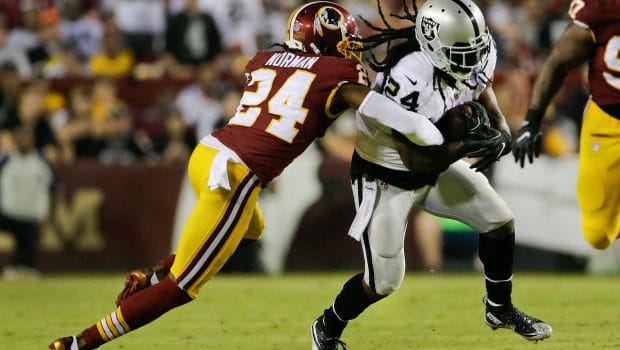 REDSKIN NORMAN OUT, BREELAND IFFY FOR MONDAY NIGHT VS. EAGLES!

Some in Eagles Nation might fear that tomorrow night’s Redskins game at the Linc could be a trap game.

The Redskins won’t have their best corner for a second consecutive week, as Josh Norman was ruled out with a fractured rib.

Norman had held out hope that he’d play, having increased his activity Thursday and Friday. He was limited, but he did participate in individual drills. Norman did not practice yesterday.

Meanwhile, fellow starting corner Bashaud Breeland was listed as questionable with a sprained MCL. Breeland said after practice that he felt good and coach Jay Gruden said “he’s looking better,” but the Redskins won’t have his likely status until after today’s walk-through.