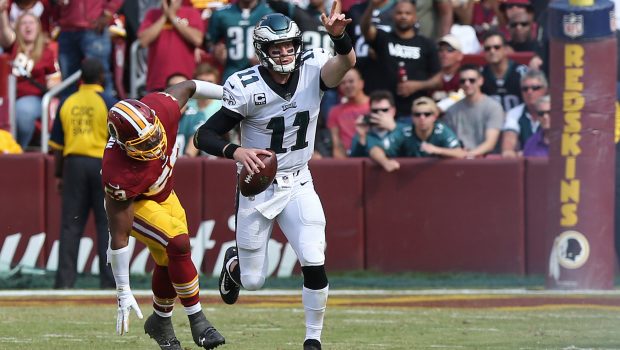 REDSKINS PREPARING FOR EAGLES WENTZ, NOT THAT IT WILL MATTER!

“He’s a really good athlete,” Redskins linebacker Mason Foster said about Carson Wentz. “I think people sometimes don’t give him that he’s credit that he’s due as an athlete because he’s 6-foot-5, can run pretty well, breaks tackles and he’s always looking to throw the ball, still. I think it makes him dangerous. A lot of quarterbacks go down when you grab them, but he’s the one that will fight and throw the ball downfield, throw the ball with his left hand, stuff like that. It’s crazy.”

The Redskins know all about Eagles quarterback Carson Wentz:

He averaged 287.5 passing yards and three touchdowns in two games against Washington last season, a pair of double-digit wins for the eventual Super Bowl champions. He ran for a season-high 63 yards on eight carries in the second meeting while also tossing four touchdown passes.

Wentz then went down with a torn ACL in a Week 14 win over the Los Angeles Rams, and he has been a bit slow returning to form. His touchdown-to-interception ratio has dropped dramatically, and he’s not being used as actively in the run game. The quarterback averaged 4.9 rush attempts per game last season, and that number has dropped to 2.9 in 2018.

Eagles Coach Doug Pederson acknowledged on a conference call yesterday that his team’s offense has taken most of the season to find a groove because of injuries — including Wentz missing the first two games — and that it’s still a work in progress. Wentz threw three interceptions and no touchdown passes in a 48-7 loss to the Saints two weeks ago, but bounced back in a 25-22 win against the Giants last week.

“I think it’s just confidence in his knee and confidence in his ability to play,” Redskins defensive coordinator Greg Manusky said. “Overall, he has good targets to throw the ball too. They have a good running game. They have a good offensive line. He’s just taking it in stride and kind of knows the system a little bit better of course after his second year. But, he’s having a lot of success and he’s playing good.”

Cornerback Josh Norman added, “He’s been threading that ball. He’s got one of the strongest arms and he can play with it. He can play with it pretty well. You can see that on film. He did that for sure last weekend.”

The Eagles have struggled to run the ball thanks to a depleted running back corps that has suffered a variety of injuries. Lead back Jay Ajayi was placed on injured reserve after four games, while veteran Darren Sproles has played just one, but could return this week. The circumstances have put more on Wentz and the passing game, which, if that holds on Monday night, should put more pressure on the Redskins’ secondary.

That group is likely to be without cornerback Quinton Dunbar, again, as he continues to deal with a nerve problem in his leg. That leaves Greg Stroman and Danny Johnson, who have had up-and-down rookie seasons, to be tested on the outside.

“I feel like we are getting into a bit of a rhythm offensively,” Pederson said, “And, as a team, I think it’s just taken time, which obviously, during the regular season you don’t have. You’d wish this took place in the offseason, or during training camp, but it was unfortunate for us. But it is what it is and we’re continuing to battle through it.”