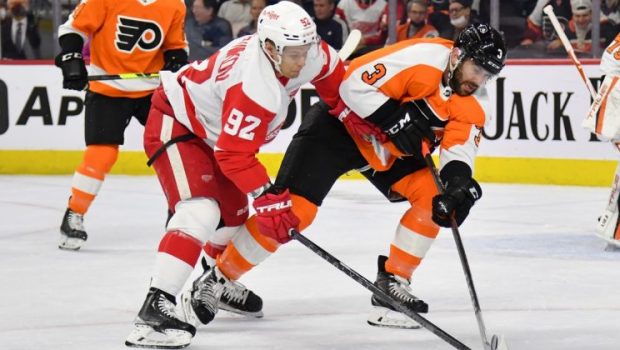 Pius Suter and Robby Fabbri scored and defenseman Marc Staal made the save of the game to help the Detroit Red Wings beat the Flyers 6-3.

The Red Wings won a regulation game in Philly for the first time since Game 2 of the 1997 Stanley Cup Final.

The Flyers three times scored seconds after a Detroit goal, but the sagging franchise couldn’t get a win.

“We recognized that we weren’t good, but there’s still an opportunity here and clearly we didn’t grab it,” Flyers coach Mike Yeo said. “We’re going to have to regroup here.”

The Flyers won two straight games heading into the All-Star break following a team-record 13 consecutive losses that spent them spiraling toward the bottom of the Metropolitan Division.

The Flyers got a lift over the weekend when team captain Claude Giroux was named MVP of the All-Star game in Las Vegas. Giroux’s hot streak carried into this one, and his feed from behind the net to Travis Sanheim for a one-timer was a rare highlight.

The Flyers had been 16-0-1 in their past 17 home games against the Red Wings.

“You go into the break kind of feeling good about where we were going,” Yeo said. “Clearly, that game did not match our expectations.”

Detroit’s Dylan Larkin scored only 2:43 into the game — and Philadelphia’s Isaac Ratcliffe scored his first NHL goal only 20 seconds later. Lucas Raymond knocked a rebound past a fallen Carter Hart and made it 2-1 Red Wings — and Sanheim scored 24 seconds later.

Sure enough, after Fabbri made it 4-2, the Flyers needed 21 seconds for Scott Laughton to make it 4-3.

“It didn’t seem like we had anybody that could really keep swinging the momentum,” Yeo said. “We had one good shift, then we had a really bad shift.”

Givani Smith sealed the win for Detroit with his fourth goal in the third and Vladislav Namestnikov added an empty-netter in the final minute.