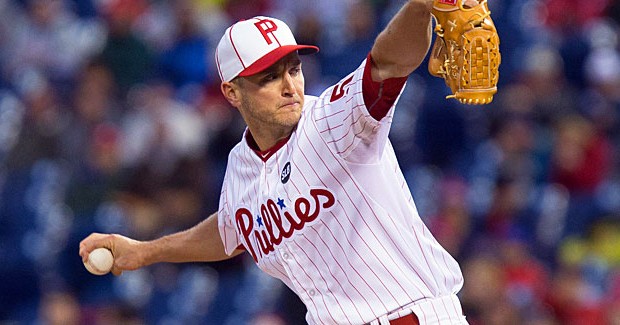 David Buchanan learned the lesson inspired by “The Wizard of Oz”:

We’re not in Clearwater anymore!

Buchanan pitched as well as anybody in Phillies camp this spring, but he struggled against the Red Sox last night. He allowed seven hits, six runs, four walks and struck out one in just three innings.

The Red Sox made him pay for every mistake he made Thursday night in a 6-2 victory over the Phillies at Citizens Bank Park.

Buchanan retired the first two batters he faced in the third inning before the Red Sox scored six runs on three infield hits, two walks, one bloop triple and one single to center by Boston pitcher Justin Masterson. The Red Sox cruised from there to win the first series of the season.

“That inning can’t happen,” Buchanan said of the six-run third inning. “Two outs, no runs have scored yet. You’ve got an open base and you end up walking a guy. You deserve what’s coming if you keep doing that.”

The Phillies scored a couple runs against Masterson in the third, but otherwise made little noise offensively. Masterson allowed three hits, two runs, two walks and struck out seven in six innings.

“When he’s right, he puts the ball on the ground, and he was able to do that here again tonight and helped his own cause with a couple of base hits, but it was a solid six innings,” said Red Sox manager John Farrell.

Pitching for Boston in a regular-season game for the first time since 2009, Masterson had a standout performance in multiple ways. The righty fired six strong innings to earn the win and also went 2-for-3 with an RBI. It was the first multihit game of Masterson’s career. More >

The Phillies scored just six runs in three games against the Red Sox and many of the problems started at the top of the lineup with Ben Revere, Chase Utley and Ryan Howard struggling in the series.